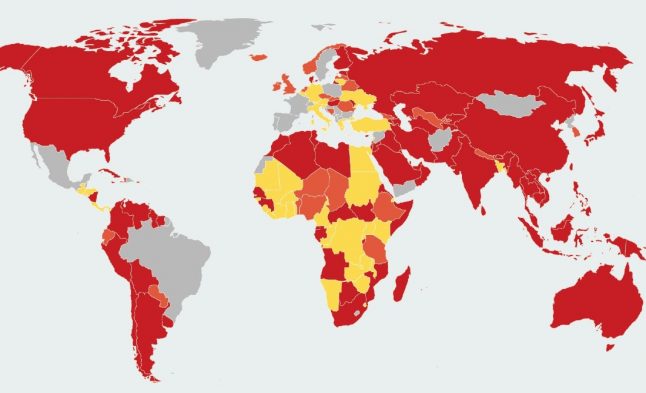 Many countries have put Spain on a “red list” banning travellers from there and others have imposed compulsory quarantine on arrivals or insist on a negative Covid-19 test.

Here's a look at the latest situation anyone travelling abroad from Spain should be aware of.

As Spain reports steadily increasing numbers of Covid-19 cases, several countries have taken action to impose quarantines on arrivals from the country or certain hard-hit regions.

The quarantine rules are based on the country you are travelling from, not your nationality, so anyone traveling from Spain will be subject to these rules, not just Spanish people.

Here's a roundup of the restrictions in place:

Some countries distinguish between arrivals from different parts of Spain, with different rules for those arriving from the Canary Islands.

There’s a long list of countries that currently require travellers from Spain to quarantine on arrival.

The map below published by Spain’s Ministry of Foreign Affairs shows those areas in red where travellers from Spain are banned, those in grey where no restrictions are in place while those in orange require quarantine and those in yellow further measures such as a PCR test or medical certificate.

Here’s a closer look at some of the measures required from certain countries:

The UK government abruptly decided on Saturday July 25th to impose a blanket 14-day quarantine for British tourists returning from their holidays in Spain and that has remained unchanged to this day.

The measure applies to tourists flying back to England, Scotland, Northern Ireland and Wales.

However an exception has been made for the Canary Islands which is now on a travel corridor safe list removing the need for compulsory quarantine for those returning from there.

The UK’s FCO advises against all non-esstential travel to all of Spain except the Canary Islands. Read the travel advice HERE

READ MORE: What are the rules on travelling between Spain and the UK?

Travellers arriving from Spain are required to observe a 14-day quarantine on arrival.

This can be done in your home or the place where you are staying, but you should restrict movements and social contact as much as possible.

You will need to provide information on arrival concerning where you will quarantine and the Irish government says that “checks will be carried out to ensure compliance with this measure”. READ MORE

Germans are advised not to travel to Spain unless it is absolutely necessary.

Anyone arriving in Germany from Spain or having spent time in Spain in the previous 14 days before arrival will be subject to compulsory Covid-19 testing within 72 hours of their arrival and to quarantine until the test results arrive.

An exception is made for the Canary Islands which now appears on a safe list but not for the Balearic Islands.

Belgium authorities take a look at the epidemiological situation in each of Spain’s regions and have different rules depending on the risk.  As of November 9all of mainland Spain and the Balearic Islands are designated as “red zones” by Belgium authorities which means that returning travellers have to observe a period of quarantine and undergo compulsory coronavirus test.

The Canary Islands are divided into a traffic light system with Tenerife and El Hierro in red zones but the remaining are all classified as orange zones which means a Covid-test and quarantine are not required although travellers are told to be ‘vigilent’. Only La Palma falls in the green zone.

Travellers must fill out this form. More info HERE: Authorities in Switzerland have lifted compulsory quarantine for all those flying in from countries that  have a lower rate of transmission of the coronavirus than Switzerland itself. Which put Spain's off the list for the time being.

Norway has placed all of Spain in its red zone which mean travellers require a 10-day quarantine.

Finland still has strict entry restrictions in place banning all non-essential travel. You can only travel to Finland from Spain if you can prove either residency in Finland, a family link or a professional reason for travel. Holidays and leisure trips are not allowed.

Travellers arriving in Greece from Spain will, as of September 16th be required to have a negative PCR test performed up to 72 hours before their entry into the country. According to the Greek government page, “Children under 10 years old are not subject to the obligation to a PCR test.”

Travellers returning to Austria from mainland Spain have since August 11th been required to show a negative coronavirus test, or else undergo a 14-day mandatory quarantine.

Travellers from Spain's Balearic and Canary islands are exempt from the requirement.  MORE HERE:

Travellers to Italy from Spain arriving at an airport, port or border crossing can choose from a number of options, including rapid tests on the spot, or the presentation of a certificate obtained within the last 72 hours, which shows they are Covid-19 free.

They can also choose to carry out a test within two days of entering Italy, but will have to stay in isolation until the results arrive.

Anyone found to be positive, including asymptomatic cases, must report to the local health authorities. READ MORE HERE

Passengers arriving from Spain are being told to quarantine for 10 days when arriving in the Netherlands except those arriving from the Canary Islands who are exempt.

There are currently no restrictions about travelling over the border between Spain and France although all those people entering Spain by air are required to fill out a completed  health assessment form which can be downloaded HERE.

Likewise the borders between Spain and Portugal remain open with no restrictions. The Europeaan Commission is proposing that EU Member States apply a well-coordinated, predictable and transparent approach to travel restrictions in the European Union to help travellers.

The proposal includes a common mapping system based on a colour code (green, orange, red, grey), common criteria for Member States when deciding whether to introduce travel restrictions, a common approach for travellers from ‘red areas’ (testing and self-quarantine), as well as more clear and timely information to the public. Member States must now agree to the Commission’s proposal before the Recommendation can be applied.

Not surprisingly, all of Spain currently falls into the red category meanning that when the recommendations are applied, travellers from Spain will be subjected to strictest checks and measures when visiting other EU countries.

Weekly update of the @ECDC_EU map with the latest epidemiological data.

Accurate, comparable and timely information is key to track the spread of the coronavirus at both regional and national levels.

READ ALSO:  LATEST: What are the rules on travelling to Spain?