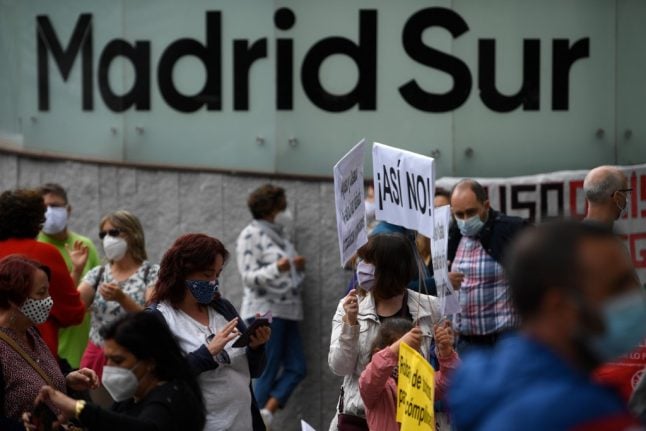 Nearly a million Madrid residents will on Monday begin a partial lockdown as Spanish authorities seek to put a brake on the coronavirus.

The restrictions, which take effect Monday for two weeks, affect 850,000 people living mainly in densely-populated, low-income neighbourhoods in the south — or 13 percent of the 6.6 million people living in and around the capital.

The lockdown measures apply to 37 “basic health zones” across the Madrid region and predominantly apply to areas of lower income and with higher immigrant populations.

Peaceful demonstrations were held in 12 of the 37 districts affected on Sunday in protest against the new measures.

They sported placards reading “No to a class-based lockdown” or “They're destroying our district and now they're locking us up”.

Hundreds gathered in the districts concerned and outside the regional parliament to shout their displeasure. People hold a banner reading “No to a classist lockdown” during a demonstration at the Carabanchel neighborhood. Photo: AFP A protester wears a jersey depecting depicting a caricature of Spanish health official Fernando Simon at the Vallecas neighborhood in Madrid. Photo: AFP A woman holds a placard reading “If they see you on the street doing sports, go to the subway where there is no virus. We are poor but not dumb” during a demonstration in Vallecas. Photo: AFP

“The health centres having been working for years with minimum staffing, they don't have enough staff or nurses … and this crisis has made the situation worse,” lamented Victoria, a 63-year-old civil servant. “You get the impression they take us for fools. We shall be able to continue to go and work in other non-confined zones at the risk of ramping up transmission, and we shall also be able to infect ourselves within our own zone,” Bethania Perez, a nurse aged 31, told AFP. A demonstrator holds a placard reading “Where is the money” as policemen stand guard in front of The Assembly of Madrid in Madrid, on Sunday 2020. Photo: AFP A policeman tries to disperse demonstrators gathered in front of The Assembly of Madrid. Photo: AFP

Madrid mayor Jose Luis Martínez-Almeida said the measures did not discriminate against the poor.

Madrid's regional president Isabel Diaz Ayuso, who has been slammed for her management of the crisis, is due to meet Sanchez on Monday.

The meeting is a sign of central government concern over the crisis in Madrid, as the management of public health issues is normally the responsibility of Spanish regional authorities.

As such, experts fear a sharp increase in the regional mortality rate — which is currently much lower than in the spring — over the coming weeks.

Spain has so far recorded over 30,000 deaths – one of Europe's worst tolls – and 600,000 confirmed cases, according to official figures.

Several districts of southern Madrid have counted more than 1,000 cases per 100,000 inhabitants — around five times the national average, which in itself is the highest in the European Union.

Residents will be banned from leaving their district other than for essential travel like work, medical care or taking children to school, Madrid's regional government said Friday.

Parks will be closed but shops, bars and restaurants will remain open at 50 percent capacity.

Meanwhile, gatherings of more than six people will be banned in the entire region, down from ten currently.