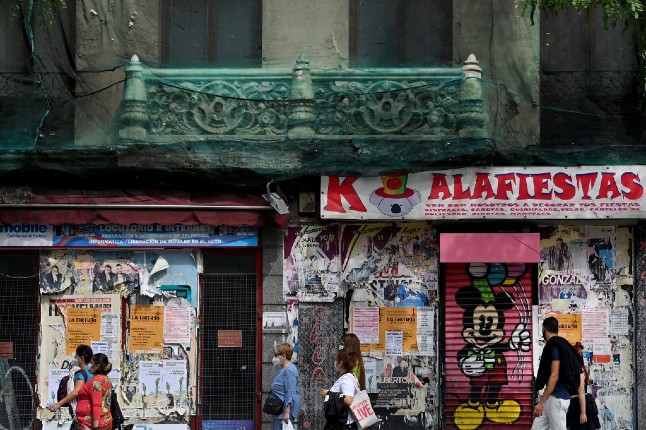 People walk past closed shops in the neighbourhood of Vallecas in Madrid on September 17. Gabriel Bouys/AFP
Spain's sovereign debt grade was affirmed at “A” but S&P Global said the caution on the outlook was driven by concerns the government will not pass a budget for the third straight year “and economic weakness could persist into 2021 and
2022.”
“The pandemic has stopped growth in its tracks. We now estimate that for 2020, the economy will contract by 11.3 percent,” the ratings agency said in a statement.
“We believe that the resulting economic pressures on Spain may have increased prospects of a political agreement this autumn for a 2021 budget, while building consensus behind the pro-growth reforms detailed in Spain's
National Reform Program.”
The agency credited the stimulus measures with preventing an even deeper recession in the Spanish economy, but noted lingering risks, including the high government debt level.
However, Moody's was more upbeat on Friday, maintaining the debt outlook at stable in addition to holding the credit rating steady at Baa1.
The agency noted that “government support measures combined with past progress in restoring competitiveness and reducing macro imbalances should provide for a robust economic recovery next year.”
The low interest rate environment will also soften the impact of the elevated government debt, Moody's said.