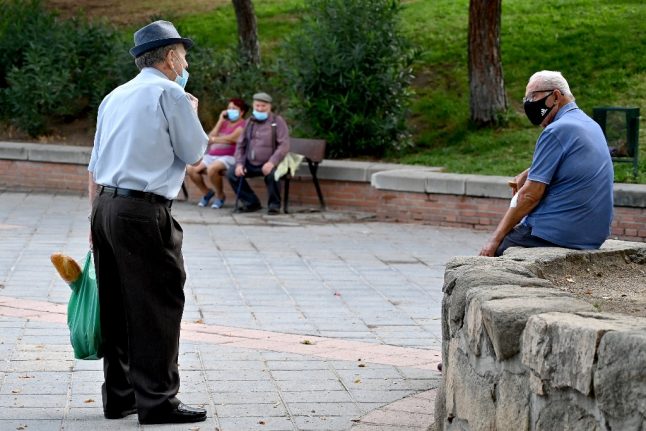 Two elderly men chat in the neighbourhood of Vallecas in Madrid on September 17, 2020. AFP

In a country where public health services are left in the hands of Spain's 17 autonomous regions, senior official Ignacio Aguado said it was “necessary and urgent that the Spanish government get involved, and that means decisively, in controlling the pandemic”.

“The reality of the epidemic in the community of Madrid is getting worse and we need to make greater efforts,” said Ignacio Aguado, vice president of the region of some 6.6 million people.

A press conference due to be held at 1pm on Friday to announce new measures was delayed until later in the day.

Spain is currently battling a resurgent second wave of Covid-19 although the mortality levels are far lower than they were in spring.

And once again, Madrid is the region with the worst outbreak, accounting for a third of the national figure for both infections and deaths with a level of transmission which the World Health Organization's European director has described as “alarming”.

Prime Minister Pedro Sanchez said he had summoned Isabel Diaz Ayuso, the head of the Madrid region, for an emergency meeting “to define a common strategy”.

Madrid officials have warned that the region's healthcare system was coming under increasing pressure with one in five hospital beds occupied by Covid patients. So far, there are 2,850 people in hospital of whom 392 are in intensive care, regional figures show. A woman walks her dog past an empty restaurant terrace in downtown Madrid on September 16, 2020. AFP

The latest figures show 20,987 people have been diagnosed with Covid in the past seven days and 138 people have died.

In several districts of southern Madrid and a handful of areas just outside the capital, cases have shot up with more than 1,000 cases per 100,000 inhabitants — far above the national average of 285, which in itself is one of the highest rates in Europe.

The numbers have spiralled despite the fact that mask-wearing has long been compulsory in all public places across all of the country, with the region's admission coming just days after the start of a new school year that has been overshadowed by the fears and worries of parents and teachers.

On Friday, Madrid is to unveil a raft of restrictions on movement to slow the spread of the virus, which regional sources say will take effect either on Saturday or Monday.

Regional health chief Antonio Ruiz Escudero said the Madrid government was working on a series of measures “to restrict mobility and reduce activity in certain areas.. where the virus is most-widely transmitted”.

“We are in a situation of sustained growth (in cases),” he warned.

“We have to do whatever is necessary to control the situation in Madrid” where we have “what is likely the biggest problem”, Health Minister Salvador Illa said.

Thursday's admission came a day after a top regional health official raised the possibility of a fresh lockdown in the worst-hit areas.

His remarks triggered anxiety and a flurry of questions about how it could work, given that most hotspots are poor areas where most people travel to work in the city centre or in other areas of the region.

“It would be bad for shops, for small businesses and little bars that survive on people coming in, for schools,” said Maribel Quesada, a 55-year-old resident of Puente de Vallecas, one of the worst-hit areas.

“People are really sick of being at home, the (spring) lockdown was very difficult,” she said of the three-month confinement under some of the strictest conditions in the world, with people only allowed out to buy food or medicine or for a medical emergency.

The regional authorities quickly called for calm but the measure they take will not be clear until Friday.

Spain has so far suffered more than 30,000 deaths and 600,000 cases of Covid-19, government figures show, with the numbers rising so rapidly that in one week alone, the country added around 100,000 new infections. 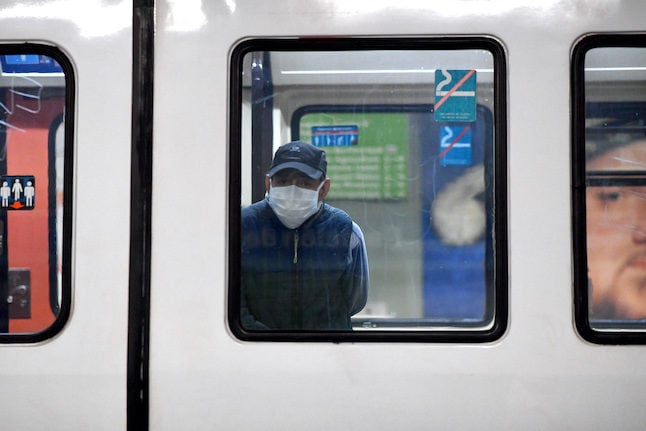 Spanish Health Minister Carolina Darias confirmed end the end of January that face masks would no longer be compulsory on public transport, a measure that has been in place in Spain for almost three years.

On Tuesday February 7th, the Spanish government finally approved the measure and it was published in the Official State Bulletin (BOE) on Wednesday February 8th, meaning that masks will no longer be required on public transport.

The measure is possible because Spain’s Covid-19 “epidemiological situation
is enormously stable at the moment,” Darias told a news conference after a weekly
cabinet meeting.

Spain has ceased to be the only country in Europe that still requires the use of face masks on public transport.

The measure comes months after other European countries took the same decision, which has been delayed due to the threat of the Covid-19 situation in China and fear of new variants such as ‘kraken’ from the US.

Where else masks will masks not be mandatory any more?

Darias elaborated further, confirming that as well as on public transport, masks will not be required in health establishments such as opticians, auditory and orthopaedic centres, where they had been up until now.

Will they still be required anywhere?

Yes, the government has stated that face masks will still be mandatory in all other health centres, pharmacies and hospitals, as well as in care homes.

You will also need to continue wearing them in dentist offices, physiotherapy centres, blood banks, family planning or fertility clinics and psychology or psychiatric offices.

What about on aeroplanes?

Aeroplanes will be counted as public transport and therefore, you will no longer need to wear a mask when flying to or from Spain.

This will bring Spain in line with many other European countries who dropped the mask rule on planes months ago, which airlines have been asking for, for a while.

The corporate director of Iberia Juan Cierco has been very critical of the mandatory masks on flights rule.

The use of masks outdoors ceased to be mandatory almost a year ago, on February 10th, 2022.

The latest figures for Covid-19 in Spain, published on Friday February 3rd, showed that the number of people hospitalised has fallen by 12.1 percent over the last week and by 15.2 percent in the ICU.

The current average incidence of infections in Spain over the last 14 days stood at 50.76 cases per 100,000 inhabitants.

Last week, Darias also announced the results of the controls carried out by the Foreign Health Department on travellers coming on direct flights from China.