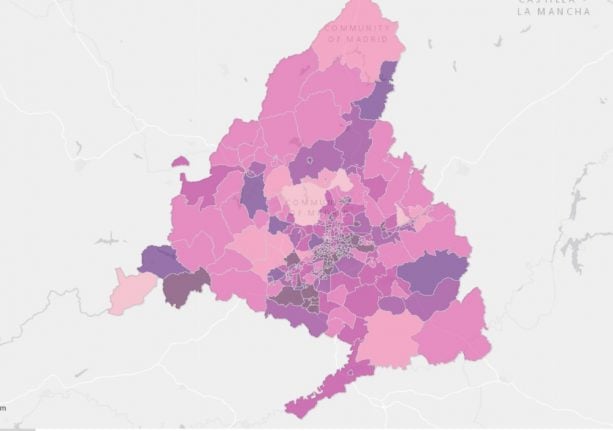 The deeper the purple, the higher the number of cases. Map: Comunidad de Madrid

The regional government of the Comunidad de Madrid have announced new restrictions on those  “Zonas Básicas de Salud” that are the hardest hit by the coronavirus. But even if you live in Madrid you may be wondering what a  Zonas Básicas de Salud is and how you find out which one you live in.

These are designated areas determined by the regional health authorities and you can find out where they are by exploring the map produced by the Madrid government below.

No easy to read map has been produced by authorites as yet but if you locate where you live and examine the data you can find out whether the accumulative incident rate of new cases over the last 14 days is over 1,000 per 100,000 inhabitants.

In Spanish this is called the “Tasa de incidencia acumulada de los últimos 14 días”.
If it is then you are likely to be within the “quarantine zone”.
Click on the interactive map below and hover over the area you want to check and a box will appear with all the latest epidemiological information. The deeper the colour purple, the higher the incidence rate. The figure circled here in blue is the one you need to look out for and if it is over 1,000 per 100,000 then the “health zone” will likely be a restricted area, although there are five zones which appear to be above the limit but are not included among the confined areas. These are  Doctor Trueta, Las Fronteras, Lavapiés, Miguel Servet and Sierra de Guadarrama.
On the other hand three zones (Francia, Las Margaritas y Sánchez Morate) that have been added to the restricted list have an incidence rate just below the 1000 cases per 100,000 people threshold.
You can also look at these interactive maps produced by Spanish newspaper, El Diario where the first map clearly shows in red, the areas with confinement perimetres.

If you find lists easier to navigate than maps and are confident you  know which health zone you fall under then here is a list of those areas that have the new restrictions imposed:

And the municipalities of Humanes de Madrid and Moraleja de Enmedio. What are the new restrictions?

All bars and restaurants will have to reduce their capacity by 50 percent, parks and public spaces will be closed.

Meetings across the whole of the Madrid region have, from Monday, been reduced to six people down from the current 10.

How long will they last?