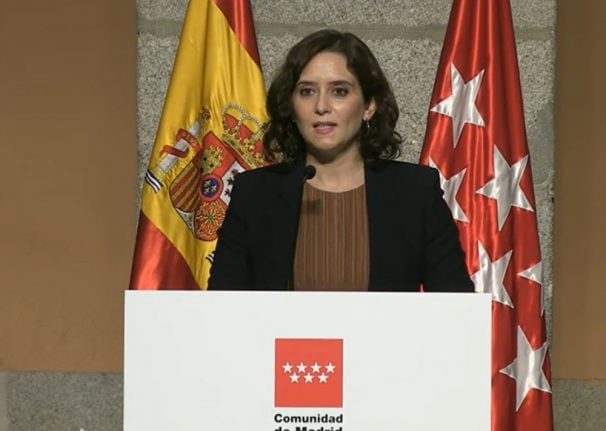 Isabel Diaz Ayuso made the announcement on Friday at 5pm.

The regional government will limit movement between and within areas badly affected by a new surge in coronavirus infections, regional leader Isabel Diaz Ayuso said in a much anticipated press conference on Friday afternoon.

The restrictions would affect over 850,000 people – roughly 13 percent of the 6.6 million population of the region where some 25 percent of the new cases had been recorded.

Those who live within zones where the average incidence of the coronavirus in the last 14 days across has reached more than 1,000 cases per 100,000 inhabitants.

The residents of the areas, mainly in densely populated, low-income neighbourhoods in the south of Madrid, will as of Monday only be allowed to leave their zone to go to work, seek medical care or take their children to school.

All bars and restaurants will have to reduce their capacity by 50 percent, the regional government of Madrid said in the statement.

She said 37 “health zones” which affect 26 neighbourhoods within six districts and 11 areas across 8 municipalities of the region had been identified for “drastic measures”. These are:

And the municipalities of Humanes de Madrid and Moraleja de Enmedio.

READ ALSO MAP: Which areas of Madrid have new restrictions? The restrictions will see the closure of parks and public spaces in those areas.

It was also announced that across the whole of Madrid groups must be limited to six people, a reduction from the current limit of ten.

“Reports indicate that most contagions are occurring in private settings, in personal relationships between families and friends,” said Diaz Ayusa, who was infected at the start of the pandemic.

“We are obliged to take these measures in these specific areas…if we did not do so, we run the risk of it being spread to the whole of Madrid. We have time to avoid it.”

But she insisted that even in the restricted areas people would not be stopped from going to work or to school.

The restrictions would be in place from Monday for 14 days and then reviewed, she said.

Since the central government ended its state of emergency on June 21st, lifting all lockdown restrictions, responsibility for public healthcare and managing the pandemic has been left in the hands of Spain's 17 autonomous regions.

Late on Thursday, Prime Minister Pedro Sanchez agreed to meet Diaz Ayuso for emergency talks “to define a common strategy” although the meeting is not due to take place until Monday.

But experts said Madrid's regional government should have learned from the experiences of other regions which reacted quickly following a surge in cases in July.

“Instead of preparing and learning from what happened in places like Aragon and Catalonia, which have coped better with the epidemic, Madrid and other regions didn't put the necessary measures in place,” said Salvador Macip, a health sciences expert at Catalonia's Open University.

“We have found ourselves in a situation which is out of control and did not need to be.”

Santiago Usoz, a medic working at the accident and emergency unit in Madrid's October 12 hospital, said there was a lack of both beds and staff.

“Intensive care units are overwhelmed with Covid patients,” he told AFP, adding that his hospital had 35 patients needing intensive care but only 32 beds in the ICU.

“Since the start of September, the admissions curve has been steadily rising… In spring the biggest problem was the lack of material, now it's the lack of human resources.”

Regional figures show there are 2,850 people with Covid in hospital of whom 392 are in intensive care.

Figures from the Spanish health ministry indicate that over the past week, 20,987 people have tested positive for the virus in the region and 138 people have died.