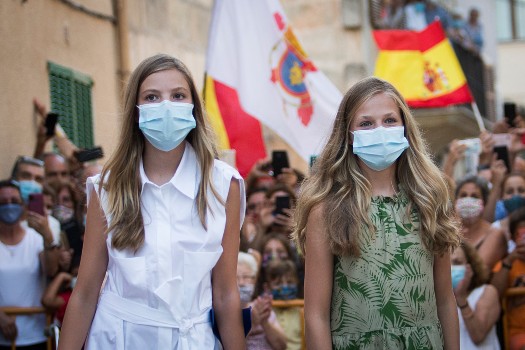 The Spanish roayal family have been wearing masks on public visits. Photo: AFP

When the virus reached the country in March, the central government declared a state of emergency that allowed it to take control of healthcare and security.

It imposed one of the world's most draconian lockdowns, helping contain the spread.

But infections have soared since the state of emergency was lifted at the end of June and powers — especially healthcare — were returned to Spain's 17 regional governments, leading to a patchwork of different measures.

READ ALSO: How worried should we be about coronavirus resurgence?

For instance, while other parts of the country have banned gatherings of more than 10 people for weeks, capital Madrid has only just introduced the measure despite being hardest hit by the virus.

“This rebound has a lot to do with the structure of Spain's healthcare system,” said Jose Molero, the secretary general of doctors' union Csit.

Since the end of the lockdown “we lost the coordination role of the central state and let regions make their own decisions,” which have been less “effective” in the virus fight, he added.

The number of confirmed Covid-19 cases in Spain rose by 12,183 on Friday to 566,326, according to health ministry figures, the biggest jump in a 24-hour period since the pandemic began.

But they lack the authority to limit people's movements around Spain, the “most effective” step to halt the spread of the virus according to Sandra Leon Alfonso, a politics professor at Madrid's Carlos III University.

Molero agreed, saying stricter virus rules imposed region-by-region have little effect unless people are prevented from travelling from areas with many infections to those with fewer.

“You will find yourself with people who come from another region, where measures are more flexible. And with more infections,” he said.

The conservative opposition — which pressured Prime Minister Pedro Sanchez to lift the state of emergency — now accuse him of a lack of coordination and demand strong action.

Sanchez, whose minority leftist government relies on the support of small nationalist Basque and Catalan parties to pass legislation, defends what he calls “co-governance” with the regions “despite the worrying evolution of the pandemic”. A man has his temperature taken in Madrid. Photo: AFP

He has parried accusations that the central government is not doing enough by pointing to the 2,000 soldiers made available to regions last month for contact tracing work.

A “political calculation” lies behind Sanchez's decision to let the regions assume “responsibility for the relapse” in the pandemic, said Alejo Quiroga, a political professor at the Complutense University of Madrid.

After conservative-governed Madrid and the southern region of Andalucia pushed hard for the state of emergency to end so they could recover their powers, he wants to “show their incoherence” now that they are asking for more coordination from the central government, he added.

In other European nations, decentralised government has not hindered the virus response.

In Germany, which also has a decentralised health care system, Chancellor Angela Merkel has largely managed to coordinate the response of the country's different regions.

The difference in Spain is that central and regional officials have shown fewer qualms about playing “power games” which have hindered the fight against the virus, said Daniel Sanso, a constitutional law expert at the European University of Madrid.

And in a country like Spain where parties have not been as united in the virus fight as neighbours like Portugal and France, “this game probably cost lives,” added Complutense University professor Quiroga.