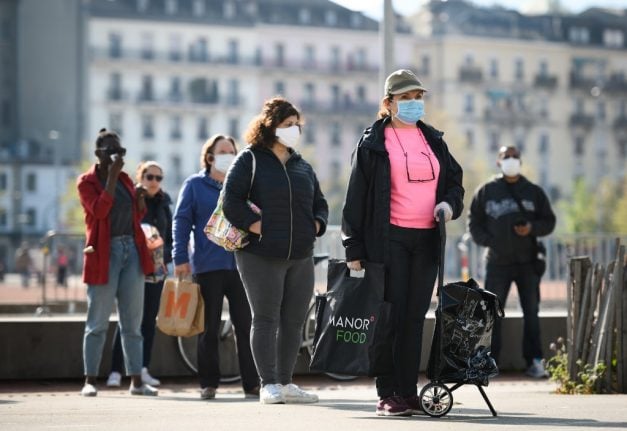 Coronavirus is back in large numbers across Europe. Since governments began to lift lockdowns at the start of the European summer, positive cases of COVID-19 have been steadily increasing in countries that previously had the spread of the disease under control, including Spain, France, Italy and Germany.

In recent days, France has recorded its highest daily tally of the new cases since the height of the pandemic in April, while Spain faces the continent’s most significant resurgence in infections.

In the UK, certain areas have been placed into local lockdowns to stem the spread of the virus, as schools begin to reopen across its four countries, though the government says rates remain flatoutside the locked down hotspots.

Most epidemiologists are reluctant to call this rise in cases a “second wave”, arguing that it is too early to say what is happening. It appears that at least some of the rise is concentrated among younger people and asymptomatic cases, and we don’t yet know why death rates are not climbing at the same rates as positive diagnoses. Countries are not yet seeing hospitals or healthcare facilities overwhelmed, as they were at the start of the pandemic.

So how worried should Europeans be about this resurgence in infections? The Conversation asked experts in Spain, France and the UK what these numbers mean, and how health authorities should respond.

In the worst moments of the pandemic – between the end of March and the beginning of April – more than 900 deaths per day were registered from COVID-19 in Spain.

Strict confinement measures reduced the number of cases (defined as a positive result in a PCR test) to a minimum of a few hundred daily in mid-June. However, in recent weeks, Spain has reported a significant increase in the number of daily cases. 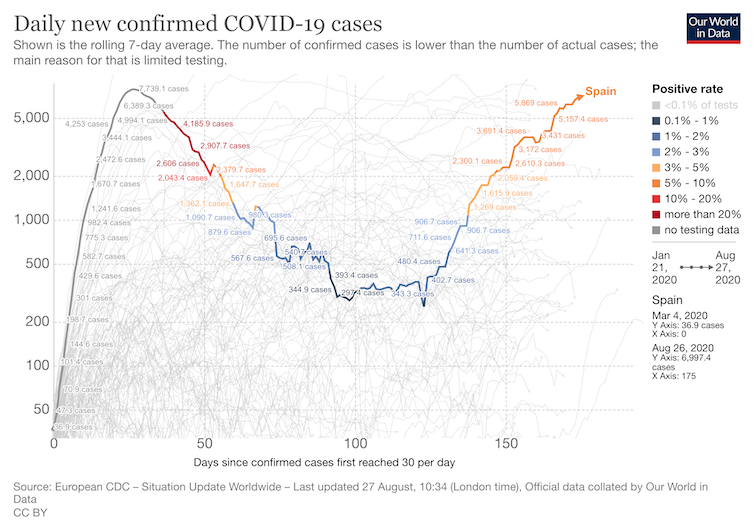 Assessing the situation is complex if we consider the difficulty of monitoring the data. For starters, there is no consensus on COVID-19 case definition between countries. In addition, there are incomprehensible data discrepancies between Spain’s autonomous communities and the federal ministry. It is thus proving very difficult to find updated data on the number of hospitalised cases and deaths, which are the most important figures we need to interpret the situation.

It is not possible to compare the situation in April with that of today. Back then, Spain performed few PCRs, which were intended only to confirm the diagnosis in symptomatic, hospitalised and severe cases. For this reason, only the tip of the iceberg was detected. Now, however, detection protocols have been tightened and all close contacts of each new positive case are subjected to testing, regardless of whether or not they develop symptoms. Since thousands of PCRs are being done, we can now detect the submerged part of the iceberg.

The detection of isolated outbreaks from asymptomatic cases at this time does not seem alarming. In fact, it is something that could be expected considering that we have been confined for three months and that only a small percentage of the Spanish population came into contact with the virus during that time. But although the situation is not alarming, the trend can be described as very worrying, given the fact that new outbreaks are detected every week.

On one hand, it is reassuring to think that, at the moment, the virus appears to be relatively stable and is not accumulating mutations that affect its virulence – more deadly second waves in some influenza pandemics were associated with genetic changes in the virus.

But what is disturbing is that we are facing a new virus for which, in principle, the population does not present immunity. That could favour the appearance of a new wave. What we cannot rule out is that some of the outbreaks that are detected now end up getting out of control and causing bigger problems. Hence, the importance of strengthening control.

On the part of individuals, this is about preventing contagion at all costs with masks, social distancing and good hygiene, in addition to trying to avoid crowded, indoor spaces where many people are close together for a long time.

As for the health authorities, they have no choice but to take the lead. The virus does not care if we call this an outbreak, a flare-up or a second wave. The virus does not recognise our internal or external borders. We need coordination, tracking, quarantine and isolation, and the strengthening of our primary care system. And we must by all means necessary avoid the virus reaching our hospitals again.

Regardless of whether there is a second wave, adding SARS-CoV-2 to the list of viruses and bacteria that cause respiratory infections during the winter could be a very serious problem. Since no vaccine will be available this winter, we must prepare for the worst.

This article is republished from the The Conversation under Creative Commons licence. Read the original article here

For you: more from our Insights series:

To hear about new Insights articles, join the hundreds of thousands of people who value The Conversation’s evidence-based news. Subscribe to our newsletter.