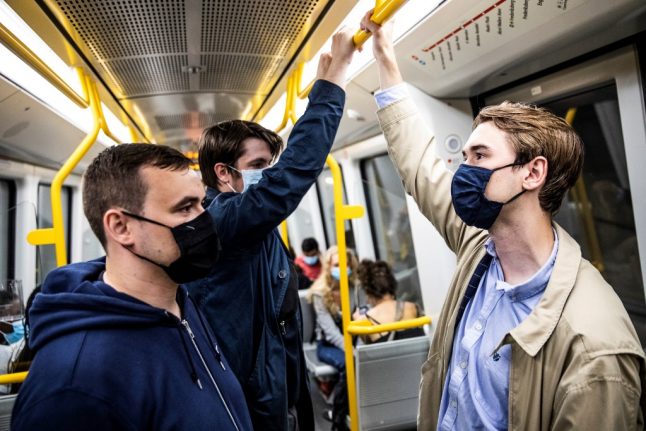 People wear mask on a metro train in Copenhagen. Some 95 percent of Danes believe their government has done a good job. AFP

The approach to dealing with the unprecedented coronavirus pandemic has differed in almost every country and continues to do so.

A new wide-ranging survey from the Pew Research Centre has also revealed that public approval ratings towards government's handling of the crisis also vary widely.

People in Britain were the least impressed with their country’s handling of the coronavirus outbreak with only 46 percent of the British population believing that their country has done a good job in handling the crisis.

That was the lowest score out of 14 countries around the world.

At the other end of the scale were the Danes – 95 percent of whom believed their government did a good job in handling the crisis.

Denmark was one of the first countries in Europe to emerge from lockdown and re-open its schools. And after a summer spike of infections that promoted fears of a second wave the spread of infections was once again rapidly brought under control.

In Sweden, where the government has followed a different and more controversial strategy by opting to avoid lockdowns and rely more on the public to enforce social distancing themselves, some 71 percent of the public believed authorities had done a good job.

That number was well below Germany however where 88 percent of the public believed the government had been up to the task.

In France, where the public is famously critical of its leaders some 59 percent thought President Emmanuel Macron and his government had done a good job handling the outbreak.

That figure was well below the 74 percent of Italians who back the government's handling, despite Italy having Europe's second-highest death toll from the virus.

In Spain, which is now struggling to stem a resurgence of infections, only just over half the public (54 percent) thought leaders had done a good job.

Outside Europe, approval ratings were low in the US (47 percent) but high in Australia (94 percent). Members of the public were also asked whether their lives had changed as a result of the outbreak and it was Denmark where the pandemic appeared to have had the least impact on people's lives.

Some 73 percent of Danes say their lives have hardly changed as a result of the outbreak. At the other end of the scale 71 percent of Swedes believed their lives had changed by substantially.

A majority of Italians and Spanish also felt the same whilst most Germans (61 percent) didn't think their lives had changed much. Could European and international cooperation have helped?

One thing that populations around Europe did agree on was that “more international cooperation would have potentially reduced coronavirus fatalities”.

“As confirmed cases of the coronavirus top 20 million globally, many in the countries surveyed say that count could have been minimised through stronger international cooperation.

“Missed opportunities for cooperation to reduce coronavirus cases are felt especially strongly in Europe, where failure to coordinate the initial response led to sudden and severe outbreaks in Northern Italy and Spain.

“More than half of the people surveyed in seven of the nine European countries studied say that more cooperation would have reduced coronavirus cases.”

However this wasn't the view of Danes, who seem to believe their country was better off handling the crisis independently.

“78 percent of Danes think the number of coronavirus cases would not have been reduced by international cooperation. A majority in Germany also say that cooperation would not have reduced case numbers,” the study said.

People across each country were also asked whether the pandemic had led to more division but in most places the results were not conclusive.

Except, that is, in Denmark, where 72  percent of the population felt the country was more united than before. A majority of Swedes (58 percent) also held the same view). Respondents in other countries were more divided – apart from the US where 77 percent felt their country was divided.