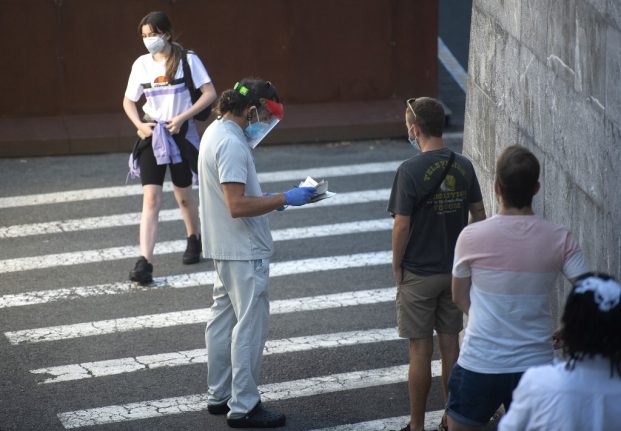 People queue to be tested at a temporary testing centre for the novel coronavirus in the Spanish Basque city of Gernika. AFP

There is a sense that Spain is going back in time.

When the country emerged from lockdown in June, it appeared that many had the sensation that Covid-19 was over.

Restaurants were full, bars were open, people did not wear masks much and the good times were back again.

Of course, back then you still read about new Covid-19 cases and the occasional death but it appeared that many people thought: that would not happen to me.

Just as it was at the height of the pandemic, the daily news is filled once again with the number of  new cases, which are now averaging 3,000 per day.

Compare that with June, when the average daily number of coronavirus cases was 132.

The death toll is also rising per day. As I write it has been over 100 for three days this week. But it is nothing like the dreadful days of March or April.

Masks are part of daily life, like leaving the house with your keys and wallet.

You think twice about going to a restaurant, staying at a hotel, travelling on public transport. Does it look safe? Do I really need to go there?

A friend who is returning to Madrid after months away is making the journey home with some trepidation as the capital now has one of the highest rates of infection.

The language of the government reminds me of the financial crash of 2008.

Then, the Socialist government of Jose Luis Rodriguez Zapatero banned ministers using the word 'crisis' – even though everyone knew Spain was heading for economic ruin.

Now another Socialist government, this time led by Pedro Sanchez, seems to want to avoid the words 'second wave'.

Officials like Fernando Simón, the country's health emergency chief, have come very close to saying the words but then he is not a politician.

Semantics aside, life is about to change for millions in a practical way next week when the schools start to go back.

Harvard University said schools should not return until the infection rate was about 20 cases per 100,000 inhabitants. The current rate in Spain is an eye-popping 191 per 100,000.

Anyway, the government seems intent on getting the eight million pupils back into the classrooms so their parents can work and save the economy.

Amid a rather confused message about how school life will be- with different versions according to which of the 17 regions you live in – it seems some things are beginning to emerge from the ether.

From the age of six, pupils will be asked to sit and learn about geography or science wearing a mask all day.

That is uncomfortable enough normally but in September, when temperatures are around 25C, it is not going to be fun. Imagine how classrooms full of children wearing masks will react? Good luck to the teachers. Pupils will be split up into different classrooms. Perhaps some will be sitting at desks in the playground?

Mass testing of pupils is on the cards, another addition to the rather strange schooling our children are going to go through.

What effect  all this is having on their education and their mental welfare will probably only be known later. Missing so much school cannot be a good thing.

As a parent, you wonder quietly to yourself what if  one pupil at a school is diagnosed with Covid-19? Will the school close?

As infection rates rise, some parents have considered withholding their children from school.

A friend of mine says amid the confusion around regulations and the soaring coronavirus cases, she is going to keep her two daughters away from school for a few weeks. I suspect she is not alone.

Yet, despite this, I am sure – in fact in our family's case I know – that everyone is looking forward to going back to school.

The kids want to see their friends, experience this weird new version of school and perhaps – if they were honest – get away from their parents.

It is, if I were honest, just the same for the parents. Around this time of the year is pretty much always like this for parents in a country where the summer holidays drag on interminably.

Except this time round, they just started in March.

If as we expect, the schools go back, then the great majority of us worker bees will probably still be stuck at home “teletrabajando”.

Nadia Calviño, the Spanish economy minister, insists Spain is on the road to recovery but controlling the coronavirus outbreaks will be key to keeping this trend going.

A friend of mine has lost his job because of the pandemic. As he struggles to try to find a job, the recovery seems a long way off.