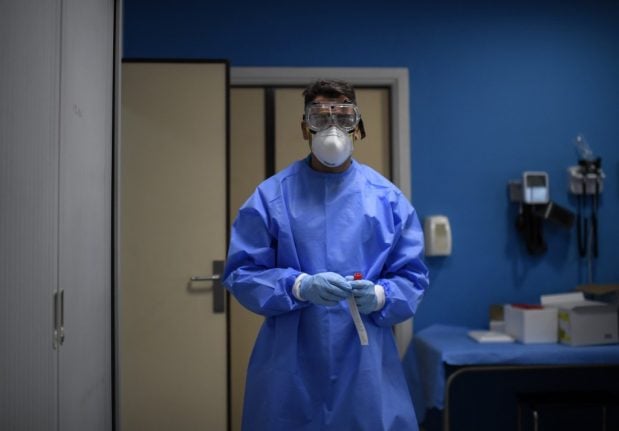 A healthcare worker holds a sample at a temporary testing centre for the novel coronavirus in Madrid on August 17th. Photo: AFP

It’s not a good title to have.

On Tuesday, the European Centre for Disease Protection and Control (ECDC) placed Spain at the top of the list of EU/EEA countries as the latest figures revealed a surge in new cases across Spain.

Spain has now become the only country listed with more that 100 new cases per 100,000 inhabitants, rising above that threshold for the first time since lockdown restrictions were eased at the start of the de-escalation phases in May.

According to the ECDC the 14-day accumulated incidence of coronavirus cases registered in Spain now stands at 132.2 cases per 100,000 inhabitants, exceeding the figure of the next highest rate of 98 recorded in both Luxembourg and Malta and is far above the figure of 20 for the UK, 41 for France, 60 for Belgium. In the last week alone, Spain has registered 33,769 new cases of covid-19 with the largest share recorded in Madrid where 10,379 people tested positive over the last 7 days, according to health ministry figures.

The chart above shows the evolution of infections across Spain with the peak reached in March and the latest surge shown in more detail below.

Fernando Simón, Spain's chief epidemiologist and the director of the Health Ministry’s Coordination Center for Health Alerts insisted that the numbers reflected the huge efforts that have gone into testing.

Random testing schemes have been put in place in neighbourhoods in Madrid and Catalonia which are detecting cases in those who are asymptomatic and who might previously have gone undetected.

But although the hospitals are far from the saturation point reached during the peak of the crisis, admissions have been rising over the last week.

The above chart shows the number of cases that have sought primary medical care (light blue) and been hospitalised (dark blue). Source: Ministry of Health

Data from the Health Ministry on Tuesday showed that 1,096 Covid-19 cases had been admitted into hospital over the last 7 days, 65 of them into intensive care and that a total of 63 deaths were attributed to the virus and registered with the Health Ministry.

Spain is the country with the most reported cases across the EU/EEA area with a total of 359,082 cases since the start of the coronavirus crisis and a total of 28,646 deaths because of it – although that number only includes those who died after testing positive.

This week Spain's regions have begun to introduce a raft of new measures in a bid to prevent a second wave ahead of the start of the school year at the beginning fof September. Regional education boards have yet to announce plans for the reopening if schools prompting uncertainty and fears of looming chaos.

READ MORE: These are the new measures imposed by Spain to fight coronavirus second wave