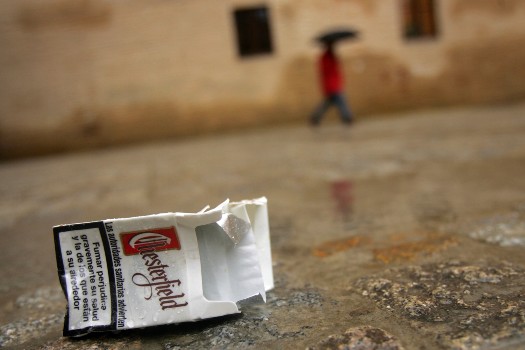 A cigarette pack on the street in Seville. Photo: AFP

The small, northern wine-growing region of La Rioja and the southeastern region of Murcia are the first Spanish regions to implement a raft of new measures which Spain's Health Minister Salvador Illa unveiled Friday to be enforced nationwide as the country battles a surge in the disease.

The measures include the closure of all discos, night clubs and dancing halls, while restaurants and bars are required to close by 1:00 am, with no new guests allowed in from midnight.

Visits in retirement homes will be limited, while smoking outdoors in public places is banned when a distance of two metres cannot be maintained.

The ban on smoking on the streets is already in place in two of Spain's 17 autonomous regions, Galicia and the Canary Islands.

Spain's remaining regional governments are expected to start implementing the new measures in the coming days.

The Basque Region, which neighbours La Rioja, plans to go a step further and will on Monday declare and “health emergency” which will allow it to impose greater restrictions on the size of public gatherings and establish selective confinement in areas where there is a high risk of transmission of the disease.

Nearly 29,000 people have died so far from COVID-19 in Spain, which declared a state of emergency between March 14 and June 21 that allowed the central government to impose restrictions nationwide.

With the state of emergency subsequently lifted, autonomy has been handed back to the regional authorities.

The health ministry has had to negotiate with them to impose the new measures on a nationwide basis.

Spain has a population of 47 million and its infection rate of 110 cases per 100,000 inhabitants is higher than in other European countries.

MUST READ: Why Galicia just banned smoking in public