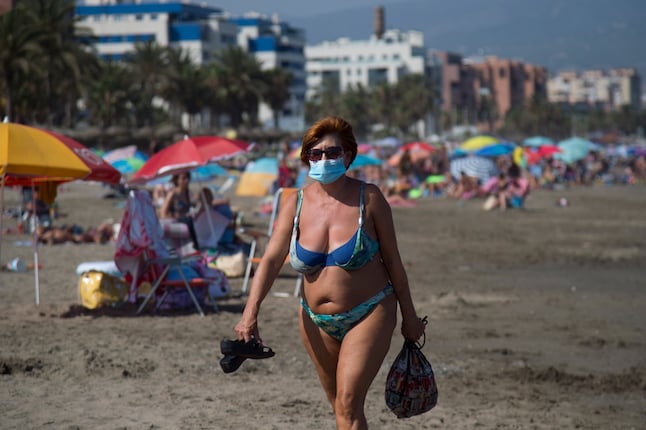 Woman wearing a mask on the beach in Spain. Photo: Jorge Guerrero/AFP

The Canary Islands have become the last Spanish region to make face masks obligatory in public spaces, both indoors and outdoors.

It was also announced today, August 13th, that the islands would follow Galicia in imposing a smoking ban in all outdoor public spaces where a safe distance could not be maintained.

The president of the Canary Islands, Victor Torres, announced these extraordinary measures after the Canaries registered a recent rise in Covid-19 infections.

“Smoking will not be allowed in open spaces, in places where there are crowds, if there is not sufficient social distance,” Torres said during a press conference, adding that terraces of bars and restaurants were included in the restrictions.

“Infected smokers could blow droplets carrying the virus when they exhale,” he added. There is now a smoking ban in the Canary Islands and Galicia. Photo: Jose Jordan/AFP

A smoking ban in the northwestern region of Galicia also came into force on August 13th. The Galician law also forbids smokers from removing masks to smoke in public if it is not possible to maintain a distance of two metres (6.7 feet) between people.

The new smoking bans in the Canaries and in Galicia are believed to be the first such restriction in Europe. Both regions are among the least-affected areas of Spain.

The Spanish Society of Epidemiology in July called for smoking to be banned in outdoor spaces, arguing there was a risk that infected smokers who are asymptomatic “could release droplets” and “put the rest of the population at risk”.

Spain's regions are responsible for healthcare policy, which has led to a variety of different measures to curb the virus.

The World Health Organisation has said tobacco users could increase the possibility of transmission of the disease since it involves contact of fingers with the lips.

While the smoking ban was applauded by many medical experts, some questioned its effectiveness.
“There is not yet enough solid scientific information to show that in open spaces, tobacco smoke can transmit the disease,” Fernando Garcia, an epidemiologist at the Carlos III institute for health, told AFP.
“To take such an extreme measure when there is not enough evidence, I think is a bit disproportionate.”