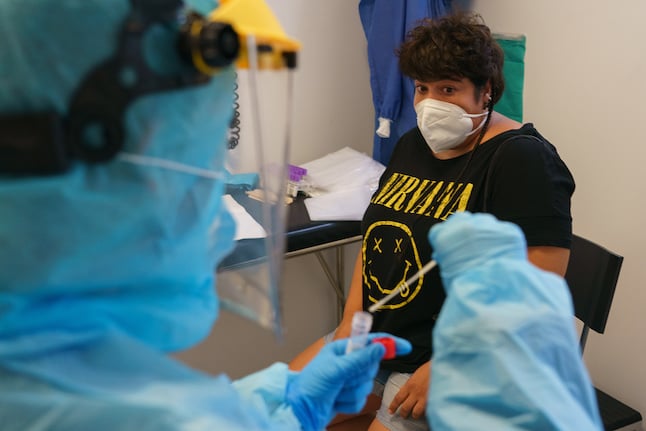 The spike in Covid-19 cases started with outbreaks in households in an impoverished working-class neighbourhood of Zaragoza, the capital of Aragon, said Jose Ramon Pano, an infectious disease specialist at the city's University Hospital Clinic.

“This is an environment that is conducive to transmission” of the disease, he added, citing cramped living conditions and the presence of a large number of immigrants who don't speak Spanish, as factors that favour infections.

These “initial sparks” were fanned at places that can aid the virus' “super-transmission”, such as family gatherings, bars and nightclubs, he went on.

Then the “fire” spread to workplaces and retirement homes in the city of around 675,000 people, putting its healthcare system “under pressure,” Pano said.

During the last seven days, the northeastern region, which is locked in on all sides by mountains, recorded Spain's highest infection rate – 270 cases per 100,000 people – as well as 32 deaths and 242 hospitalisations from the disease.

To help Aragon deal with the surge in cases, soldiers on Wednesday began assembling a 400-square-metre (4,300- square-foot) field hospital in the car park of a Zaragoza hospital. Tourists are scarce at Zaragoza's famous domed basilica and the city's river aquarium, one of the world's largest, closed its doors again on July 27th to prevent infections after being open for a month and a half.

But the streets of Spain's fifth-largest city are far from empty. In the working-class neighbourhood of Delicias, which has the city's highest infection rate, elderly couples could be seen taking a stroll and
people sat in outdoor cafe terraces.

Some locals, however, such 74-year-old Dolores Valencia Gomez, said that they had been staying home out of fear for the virus. “I only stepped out to get lottery tickets,” she said.

While people waited outside shops, adhering to a limit on the number permitted inside at a time, queues formed at health centres.

At the La Jota health centre, patients entered one by one into a room where a nurse, wearing two protective gowns, a face shield and mask, inserted a swab into their noses to test if they have the virus.

During the first week of August, Aragon – a region of around 1.3 million people – carried out at least 3,500-4,000 tests per day. When an infection is detected, a contact tracer identifies who may have been exposed by that person so they can also be tested. Young are to blame

Many of the tests are carried out on asymptomatic people, who may test positive because they had the disease months ago and are no longer contagious, said Luis Miguel Garcia, head of the Aragon association of family and community medicine.

Aragon's high proportion of elderly should also be taken into account when tallying the region's Covid-19 death toll, he added. “If an 85-year-old patient of mine with prostate cancer dies, did he die of coronavirus or with coronavirus?” he asked.

Javier Lamban, head of Aragon's regional government, has blamed youths out having fun without respecting social distancing rules and the presence of many seasonal agricultural workers, many of them illegal migrants who live in crowded housing, for the spike in infections.

“There is a kind of perfect storm here,” he said earlier this month. Lamban has promised to deploy police, social workers and health care workers to check that people diagnosed with the virus and their close contacts
respect quarantine orders and stay home.

The visits will begin in the coming days, a regional government source said. Some people in the region have called for the government and police to take a harder line against people who do not respect social distancing rules.

During the first week of August alone, Zaragoza police said they broke up 75 gatherings of youths which broke the rules.