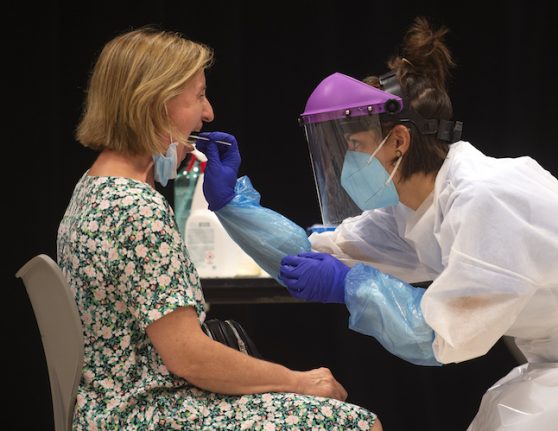 Experts have been questioning the government's policies on the virus, according to a Reuters report, which prompted them to respond by saying: “Appropriate measures are being taken to control the pandemic. The data shows that we are being very active in tracking and detecting the virus.”

New health ministry data showed that there were 1,486 new infections in Spain just on August 10th alone, bringing the total to 322,980. This is compared with 311,641, the total number of cases in Britain, which previously held the title for most cases in western Europe.

Despite the higher numbers now in Spain, more than 46,000 have died of the virus in Britain, while the total number is 28,000 people in Spain.

The Spanish government also defended its position, saying that it had tested nearly 7.5 million people since the start of the pandemic, 400,000 of them in the past week alone.

In the first half of April, Spain was second only to the United States with regard to total number cases, but it managed to contain its soaring infection rate by imposing one of Europe's strictest lockdowns.

Since the state of alarm was lifted six weeks ago, however, the virus has made a resurgence, with average daily infections rising from 132 in June to nearly 1,500 in the first 10 days of August.

In a letter published in the journal The Lancet last week, a group of Spanish health experts called for an independent evaluation of the Spanish government's handling of the crisis and listed a series of errors.

One of these experts, Ildefonso Hernandez Aguado, a public health professor at Alicante's Miguel Hernandez University, said a lack of qualified tracing staff was allowing the virus to spread undetected.

“Some regions have not understood that this was the key in the months after the lockdown and in the long term,” he said to Reuters.

Aguado also said that Spain's highly social culture was partly to blame. “This is a country that doesn't understand holding a celebration, or taking a holiday if you're not going to share them,” he concluded.