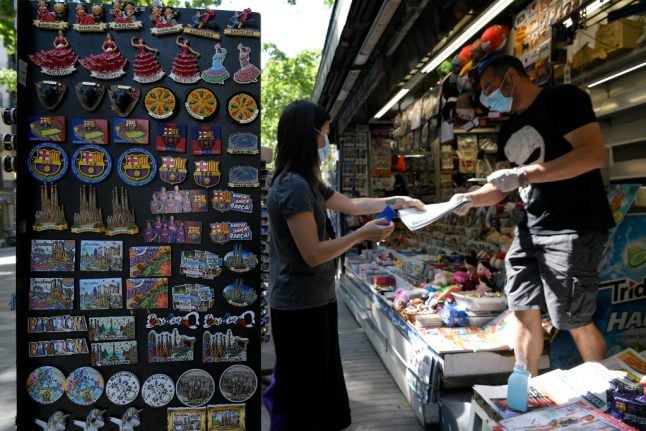 With tourism what can Barcelona do to survive? AFP

When the UK imposed a de facto ban on travel to Spain on July 25 it was the latest in a series of blows to Barcelona’s economy that began with the cancellation of the World Mobile Congress in mid-February and worsened over the months of lockdown introduced on March 14.

All of this has exposed just how dependent the city has become on the influx of some 30 million annual visitors, whether they come for business or pleasure, and how desperately the Barcelona economy needs to diversify in order to limit the human and commercial damage.

Even before the UK announced the quarantine, barely a fifth of hotels had opened and those that did had low levels of occupation. The city’s restauranteurs association expects around 38 percent of bars and restaurants will be out of business by the end of the year.

Gabriel Jené, president of the business association Barcelona Oberta, estimates that 30,000 jobs will be lost this year. He says that nearly 60 percent of his members’ clients are visitors, adding that the Catalan government’s clumsy handling of the recent Covid-19 outbreaks has scared people off.

The worst-hit area is the old city and, above all, the Born. The Born, with its restaurants and cocktail bars and cute shops selling artisanal clothes and jewellery was held up as a model of gentrification of what was until quite recently a rundown area of the city.

Now it is more of a cautionary tale. High rents have driven out traditional business and local residents and over-tourism has led to the barrio being shunned by Barcelonans in general for much of the year.

The Asociación de Comerciantes de La Ribera y el Born expects 40 percent of local businesses to close this year while the survivors face a drop of between 40-90 percent of income. With the visitors and the paraphernalia of tourism stripped away, Barcelona is laid bare.AFP

With residents driven out by the boom in tourist apartments, the barrio now feels abandoned. What was until recently one of the most fashionable and prosperous neighbourhoods in the city could be dead within a year.

With little optimism of a major tourist revival in 2021 and with massive unemployment looming, what is to be done?

For years, people have been saying the Barcelona model was unsustainable but as long as the money kept flowing, no one was prepared to step in and say, enough, we can’t go on like this. Now the virus has done it for them. A couple passes under a banner banner reading “No tourist flats” in protest against holiday rental apartments for tourists in Barceloneta's, a neighborhood of Barcelona on June 10, 2016. AFP

With the visitors and the paraphernalia of tourism stripped away, the city is laid bare. We can see it for what it’s always been: a commercial port city, a shiny version of the bustling, hustling city depicted in Eduardo Mendoza’s City of Marvels. Foreign residents can also see why they wanted to live here in the first place, something they were beginning to lose sight of.

Barcelona got rich once on textiles, then again on tourism, but non-tourist related business is what the city needs to attract if it is to soak up the inevitable job losses.

Mateu Hernández, CEO of Barcelona Global, a non-profit organisation representing over 220 businesses, universities and other institutions in the city, believes Barcelona’s future lies in the knowledge economy.

“Many young people from around the world would jump at the chance of moving to Barcelona, but we need to get rid of the bureaucratic obstacles to immigration and to setting up a business,” he says. “We also need to offer affordable, bilingual education in English.” In effect, the city needs to live within its means. If 38 percent of bars and restaurants are to close – with the loss of thousands of jobs – it’s because, without millions of visitors, there isn’t the population to sustain them.

Barcelona has always been held back by the fact that successive Catalan governments represent rural constituencies and small towns and aren’t particularly interested in it as an urban project. Neither Quim Torra, the president, nor a single member of his cabinet is from the city.

They’re all from small towns and villages and don’t think in urban terms.

This is part of the reason why many on the city council believe Barcelona needs to include the entire metropolitan area under one administration. This would take the existing population from 1.6 million to 5.5 million, almost the size of Madrid, and account for nearly two thirds of the Catalan population.

Barcelona could then punch its weight with major European cities and escape the fate of being an oversized Lloret de Mar with fabulous architecture, which is where it seemed to be heading.

Deputy mayor Janet Sanz says businesses will have to adapt to the new reality and offer residents things they want to buy, not Mexican hats and Gaudí souvenirs.

Bars and restaurants that cater to local people are likely to survive but absorbing the job losses of the many that don’t is going to take some original thinking and bold decisions.