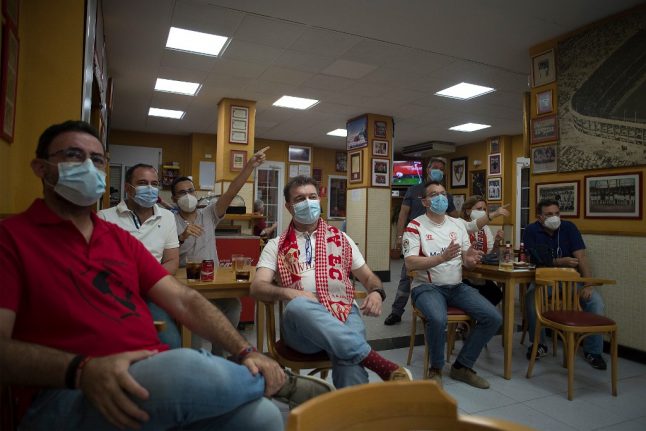 Andalusia’s Junta government has green-lighted steep fines for people who don’t respect the social distancing measures in place in the southern region and are found to have infected others with the coronavirus as a result.

For infractions deemed minor such as infecting 15 people with the virus, not wearing a face mask properly or not wearing one at all, the fines go from €100 to €3,000.

For more serious infringements such as spreading Covid-19 to anywhere between 15 and 100 people or refusing to collaborate with authorities, the fines will be between €3,001 and €60,000. Andalusia residents who have tested positive for Covid-19 and break the two-week self-isolation period also fall within this category.

And for ‘superspreaders’ who infect more than 100 other people with the virus as a result of their negligence, the fines rocket up to anywhere between €60,001 and €600,000.

Establishments such as nightclubs, supermarkets and shops that surpass the maximum capacity and lead to mass infections would also be forced to shut for up to five years apart from being handed a steep fine.

Andalusia’s Health Council will have the final word on the amount to be fined for serious breaches whereas municipal police will handle penalties for the more minor offenses.

The penalties are part of a larger decree which imposes stricter regulations for businesses and citizens in the region of 8.4 million inhabitants.

The regional government’s decision is also aimed in particular at young people as it's been found that 70 percent of new infections in Andalusia constitute people between the ages of 20 and 55.

But the Junta stopped short of ordering the closure of nightclubs and other nightlife venues where many new infections are happening such as at a discotheque in Mojácar in Almería where 20 partygoers recently contracted the virus.

Recent footage showing a DJ spitting alcohol at a crowd of revellers at a party in Torremolinos has shocked Spaniards and resulted in the closure of the establishment.

The decree also includes a clause aimed at rewarding 117,000 health workers in the region for their efforts during the pandemic with €600 more on their payroll and 4 extra days of annual leave.