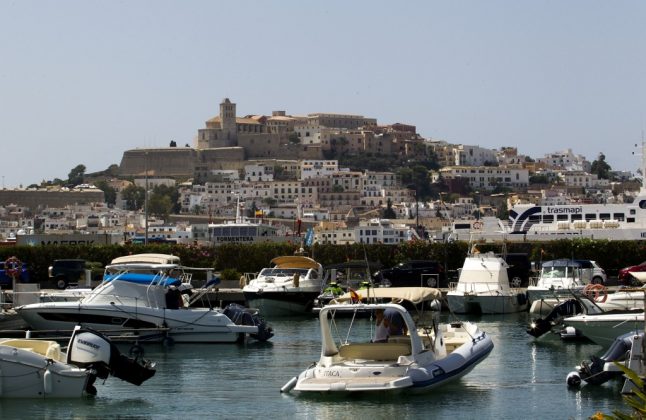 View of the Dalt Vila neighborhood taken on July 31, 2020 in Ibiza. AFP

There were just 204,926 arrivals in June of this year, which has already had a dire effect on the economy with a loss of €28,540 million euros in the semester.

Foreign tourists who visited Spain in June spent €133 million euros less than in the same month of 2019, with a an average spending per tourist of just €651 euros, an annual decrease of 40.6 percent.

One of the main reasons for this decrease was that Spain closed its borders to foreign visitors during the lockdown and didn’t reopen them until June 21st.
Even then, the borders were only open to those from other EU countries, as well as the UK. The borders
remain closed to those from outside the EU including to anyone travelling from the US.

Catalonia was the most visited region with 64,895 arrivals, which is still far less than in previous years.

The effects of this are being seen across the region, but mostly in Barcelona, where only around a fifth of hotels have reopened since the lockdown ended and 38 percent of bars and restaurants expect to close permanently once furlough payments end.

Valencia and the Balearic Islands were the second and third most-visited regions, where overnight stays have fallen by 97.1 percent and 98.4 percent respectively.

The Balearics in particular, rely heavily on tourism. In Ibiza and Mallorca many of the islands’ famous clubs simply won’t open this season.

The National Statistics Institute show that in the Balearics there were 99 hotels offering 9,824 rooms altogether open on the four islands in June. This represents just six per cent of the archipelago’s total. In the same month of 2019, there were 1,342 hotels open, offering 360,084 rooms.

Tourist arrivals also fell by 97.1 percent in the Community of Madrid, 98.9 percent in Andalusia and 99.8 percent in the Canary Islands. In the Costa del Sol, numerous hotels have had to close and the effect has also been seen at tourist attractions.

For example, the famous Tivoli World theme park in Benalmadena, has filed for bankruptcy and gone into administration.

Over the first six months of the year some 10.8 million foreign tourists visited Spain, around 72 percent less than in the same period of 2019.

The main decreases were recorded in visitors coming from the UK (down by 99.6 percent), Germany (down by 97.4 percent) and France (down by 93.2 percent).

August is expected to be another tough month for the Spanish tourism industry, as the UK has put Spain on its quarantine list and French and German governments have advised their citizens against travel to certain parts of the country.

Traditionally, August is of course the busiest month for tourism in Spain, but with Covid-19 cases rising and more outbreaks across the country, this could be one of the worst the country has seen in a long time.