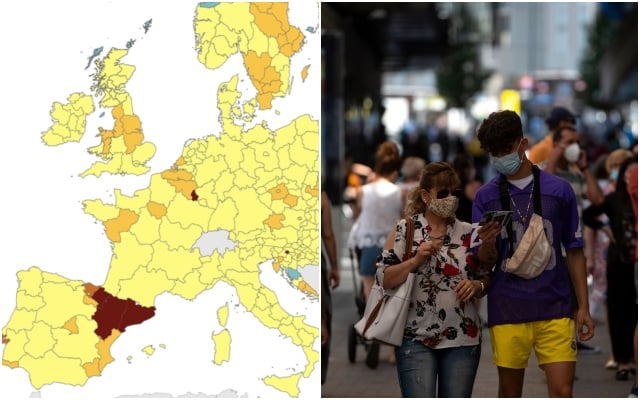 Zaragoza, the capital of Aragón, accounts for 85 percent of infections in the region. Photo: ECDC/AFP

Aragón, a historical region in northeast Spain with a population of 1.3 million, has been struggling to contain numerous coronavirus outbreaks since the country ended its state of alarm on June 21st.

The latest report from the European Centre for Disease Prevention and Control (week 30) shows that Aragón’s 14-day infection rate is above 120 per 100,000 inhabitants, the same categorisation it has received in the past three weekly reports.

The only other regions in Western Europe that have the dark red classification are neighbouring Navarre and Catalonia, to the west and east of Aragón respectively, and the tiny nation of Luxembourg which borders Belgium, France and Germany. Luxembourg’s infection rate is technically higher than Spain’s and all other European nations included in the ECDC’s map, but it is a country of just over 600,000 inhabitants (Spain’s population is 47 million) and almost 200 times smaller in size than the Iberian nation.

Even so, the evidence suggests that Aragón’s infection rate is higher still than Luxembourg's, although different Spanish news and government sources offer different rates. Some sources also prefer to use the 7-day cumulative infection rate whereas other such as the ECDC opt for the 14-day one.

Either way, the figures for Aragón are staggering.

According to data published by Spanish public broadcaster RTVE on August 4th, the infection rate for the past 14 days in Aragón is 566.9 per 100,000 inhabitants, based on Spanish health ministry data from August 3rd.

Aragón’s infection rate therefore appears to be increasing and could be currently the highest in not just Western Europe but the whole continent.

ECDC data comes from governments’ health authorities, and therefore it depends on how each country divided the data when publishing its Covid-19 statistics.

In Spain’s case it’s regional information that’s provided whereas for other countries such as Romania in eastern Europe – where the infection rate is 81 per 100,000 – the data is for districts.

But even though there are small areas in Romania and Croatia where there are localised Covid-19 infection rates as high as 158/100,000 and 262/100,000 respectively, none come close to Aragón’s figures.

In Catalonia, the infection rate collected by ECDC until July 31st was 144 cases per 100,000 inhabitants whereas in Navarre it was 142. Both are among the top ten areas in Europe with the highest infection rates currently.

Anything above 120 is considered a very high-risk area by the ECDC, which explains why Aragón, Navarre and Catalonia are on the no-travel list for several European countries.

READ MORE: Which European countries have travel restrictions and warnings for Spain?

Aragón’s regional authorities are now at a crucial point in which they have to decide whether to introduce a full and strict regional lockdown in the autonomous community, or just in its capital Zaragoza where 85 percent of infections are located.

There have already been measures introduced such as the obligatory use of face masks at all times in public places, a return to Phase 2 of lockdown de-escalation in affected areas, limits on nightlife and other establishments as well as social gatherings and government calls for residents to stay at home and not leave the region.

None of the measures have worked in curbing the rising numbers (3,970 Covid infections diagnosed in the region over the past week) and there are now outbreaks at several care homes in Aragón, which is likely to raise the death rate.

In the absence of daily infection reports over the weekend and other unaccounted data by Spanish authorities, some epidemiologists consider cumulative rates more accurate than absolute numbers as they consolidate the data.

But even so, there is still a lack of homogenous data when it comes to reporting on infection rates in the country, a widespread complaint for many Spaniards since the start of the pandemic.

For example, the Spanish government website for its epidemiology centre offers provincial data rather than regional, with the infection rate for the past week in Aragón’s three provinces reported to be 105 per 100,000 for Teruel, 174 for Zaragoza and 143 for Huesca.

This does cast some doubt over whether Aragón’s figures are completely accurate, but considering that the region’s epidemiological website has been lauded as transparent and thorough (even reporting at weekends), there is every reason to believe the situation in Aragón is as serious as it seems.