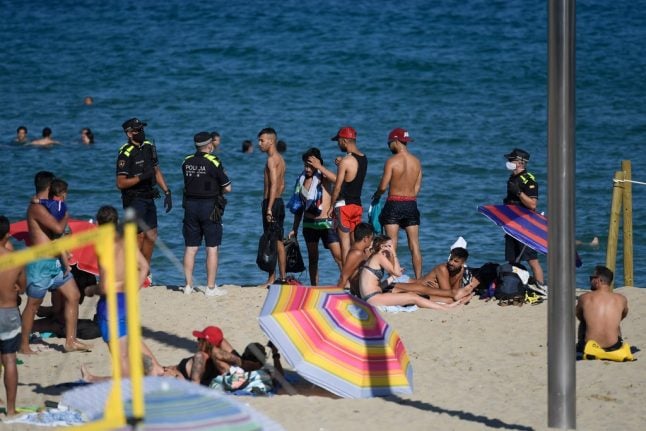 Tourists are first required to fill out a Passenger Location Card online and submit it before they arrive in the country.

This states where you’ll be staying, your recent travel history and if you’ve experienced any Covid-19 symptoms.

The new form is designed to help with contact tracing, should anyone fall ill while visiting the country.

Thermal imaging temperature checks and no-contact thermometers are also used at some airports.

When you arrive at your hotel, you’ll also see important changes.

New protocols have been put in place and extra cleaning of the rooms and common areas is required. Hand sanitiser stations have been placed throughout and staff will be wearing PPE.

At the country’s Room Mate Hotels, screens have been set up at reception, while at Riu Hotels temperature checks will be carried out upon arrival.

The AC Hotel chain has even done away with keys, allowing customers to open their door via an app on their phone.

In the big cities, a lot of work has been put into the most popular tourist attractions over the last few months to make them safe for visitors.

At Gaudí's Casa Batlló for example, a Cold Plasma Bipolar Ionization System has been installed, which purifies the air and creates a 99.4 percent inactivation rate in Covid-19.

Audio guides are disinfected with UV light, disinfectant mats have been placed at the entrance and temperature checks are required upon arrival. Similarly, at the Sagrada Família, a new air renewal treatment system has been introduced, which cleans and filters the air.

The air recirculation system has also been modified to ensure that all the air comes from outside.

At Madrid’s El Prado Museum, you are advised to book your ticket online 24 hours in advance.

When you arrive, your temperature is taken and once inside, capacity of each room is controlled and you’re required to keep a distance of two-metres between you and other visitors. Tickets must be bought exclusively online, rooms have a limited capacity and gloves are advised to be worn.

And at Granada’s Alhambra, one of the most-visited site in Spain, guided groups have been limited, audio guide services have been suspended and drinking directly from the water fountains has been prohibited.

At all the above attractions, the use of masks is required.

But it’s not only inside where changes have been made and stringent safety measures introduced. In one of the most popular holiday hotspots, Benidorm, new beach rules have been introduced.

Square metre plots have been marked out on the sand and special segregated areas for those over 70 have been put in place.

There’s also an online booking system to reserve a space and an online traffic light system which tells you when the beach is busy.

Chipiona Beach in Cadiz province has been praised for its social distancing measures, while in Catalonia’s Costa Brava, several of the smaller and most popular coves have a strict limited capacity.

At Aiguablava and Sa Tuna, near Begur, for example, umbrellas have been spaced four-metres apart and authorities are only allowing people onto the beach when there is a free designated space.

And finally, in Barcelona, beach capacity has been reduced by 15 percent.

Safety measures have also been put in place at bars and restaurants across the country.

While you can remove your mask inside and outside on the terraces, servers and waiters are required to wear a mask at all times.

Often, hand sanitiser will be provided upon arrival and at nicer restaurants, your temperature will be taken too.

Dining venues have also had to dispose of physical menus for public use and instead, QR codes have been stuck to the tables, allowing customers to access menus online and reduce the risk of contamination.