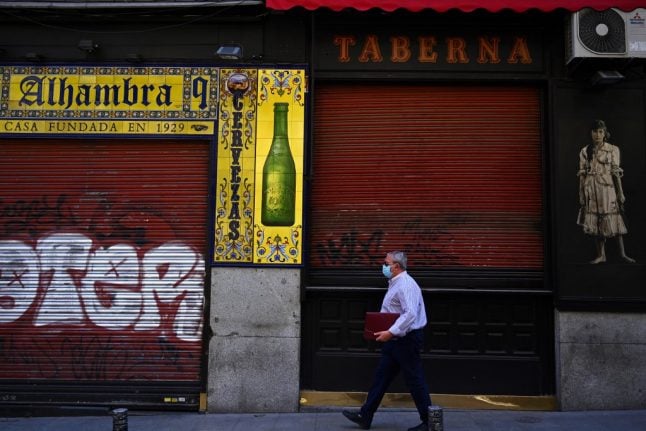 Nearly 80 percent of Spanish companies have fewer than five employees — higher than the 70 percent average in other eurozone countries — leaving the country particularly exposed to the looming crisis, the Bank of Spain has warned.

So far, 40,000 bars, restaurants and hotels have permanently closed, with the figure seen rising to 65,000 by the end of the year — or 20 percent of the total, the country's hostelry federation says.

Six years ago, Isabel — who is 56 and does not want to give her surname for fear of compromising her future job prospects — invested €120,000 in a stylish little bar in a trendy area of central Madrid.

But it went out of business even before the state of emergency was over, with the government imposing limits on customer numbers as a condition for reopening.

“It's a small place, and there's no outdoors space. I saw that the numbers just wouldn't work. With two staff and in these conditions, I wouldn't make enough to even pay the electricity bill,” she told AFP.

She had very little cashflow and banks refused to give her a loan, despite lines of credit backed by the government to support struggling businesses.

A widow with two teenagers to support, she is now living off her savings and the monthly 600 euro allowance that the government approved to help 1.7 million self-employed workers who have no income.

“I can't sleep,” she admits, bracing for the struggle she now faces to find a work in a year when unemployment levels are expected to reach 20 percent.

The bar and restaurant sector is expected to lose around a million jobs, both direct and indirect, as a result of the crisis, with turnover likely to be halved this year, industry figures say.

Customers are few and far between, in both the most popular tourist areas and business districts in major Spanish cities, which have remained largely deserted because of people working from home. And many others are suffering the same fate, from small clothing boutiques to furniture shops, perfumeries and bookshops.

Between 15 and 20 percent will not be able to reopen, says Pedro Campo, president of the Spanish Business Confederation (CEC).

“There has been a brutal collapse in sales, which are down 50 percent compared with last year. This year is a complete write-off,” sighs Miguel Angel Fernandez, who works in a shoe shop in western Madrid but has been furloughed with two other staff members.

“These are shoes for older people: our clients are afraid to go out and haven't come back,” he says.

And in a country with many close-knit families, those over 50 “know they will have to help their family so they have less money to spend,” he explains.

Those customers who do buy are prioritising smaller shops to help them through the crisis however, he says.

Teresa Garcia-Maestro, who runs a nearby clothing boutique, agrees.

“People aren't going to the bigger shops” for fear of getting infected, she says, admitting she was surprised at how sales took off after the lockdown ended.

In this well-heeled neighbourhood, “people have been out shopping, buying summer dresses… still feeling that euphoria of being allowed out of the house,” she says.

But she's worried about the autumn.

“It's going to be tough because there will be a lot of people out of work. If there's unemployment, people don't spend money and that will impact all of us.”

Above all, she's worried about having to close again owing to the rising number of infections across the country.

And if businesses do have to close again, “either people will die of the virus, or they'll die of hunger.”