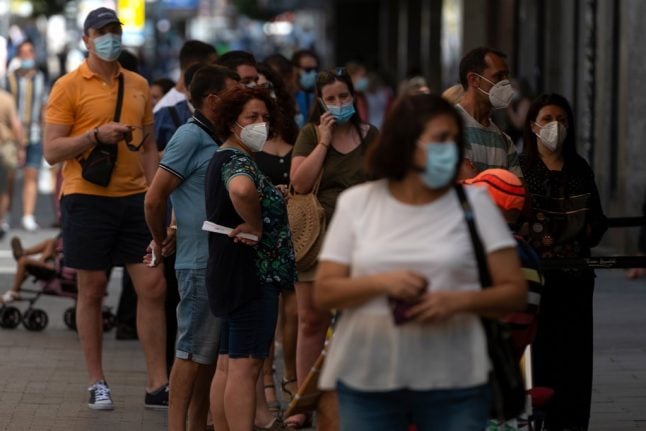 Spain’s Health Ministry has reported that the country has equalled the number of Covid-19 infections it recorded on May 1st, on the eve of the day on which Spaniards were authorised to go for walks after a month and a half locked indoors.

The regions of Aragón (424 new infections), Catalonia (211) and Madrid (199) account for 72 percent of Wednesday’s new positives for coronavirus.

The latest health ministry data shows there are 412 active outbreaks currently in Spain.

Despite the almost 200 new infections in the Spanish capital on Wednesday, Madrid’s 14-day infection rate remains relatively low by comparison: 31.9 per 100,000 inhabitants.

The way in which Spanish health authorities count new infections changed on May 25th; previously all diagnoses reported on the previous day were counted regardless of when they were carried out, whereas now it’s only the cases actually diagnosed the day before.

If the old method was still used, Wednesday’s daily infection figure would be higher than 1,153 – 2,031.

But it’s also worth noting that Spain’s testing capacity has increased exponentially since the start of the pandemic, from a rate of 5 to 10 percent of tests carried out for people with symptoms up to 95 percent recently.

Only 1.2 percent of these tests are coming back positive, proof for Spain’s head of Health Emergencies Fernando Simón that “transmission has been reduced”.

The average age for people who are testing positive for the coronavirus has dropped from 60 during Spain’s full lockdown to 40 among men and 43 among women in recent weeks.

This according to Simón explains why the number of hospitalisations and deaths is lower than on May 1st.