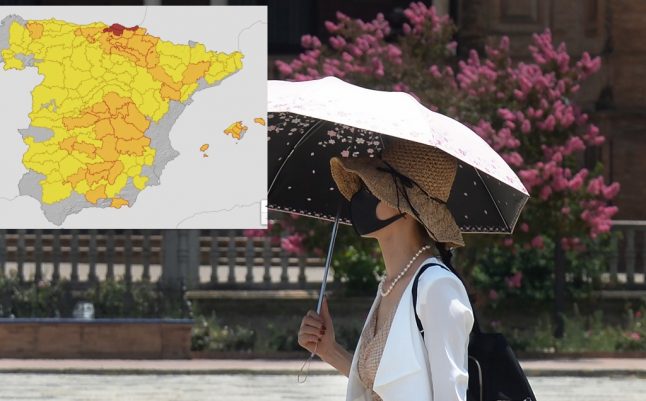 Spain’s national weather agency AEMET has announced that the first “ola de calor” (heatwave) of 2020 started on Thursday in the country, with every region except for the Canary Islands expected to sizzle in daytime temperatures between 35C and 40C.

According to AEMET, in order for a spell of extreme heat to be classified as a heatwave it has to affect the majority of the country and last for an extended period of time, which explains why previous days of extreme heat haven’t received this classification so far this year.

Thirteen autonomous communities have been placed on alert, with the biggest temperature rises forecast for Spain’s northern coastal regions, which are generally cooler than the sun-drenched interior and southern parts of the country.

The mercury will hit 42C in Bilbao in the Basque Country, unusually high temperatures even for July, which explains why AEMET has placed Gipuzkoa province on red alert. Daytime temperatures will be above 34C in virtually all of Spain’s interior; in central and southern parts of the country such as Castilla y La Mancha and Andalusia it will be even hotter – between 37C and 41C.

Other parts of Spain where it will be sweltering include Madrid (41C), Mallorca (39C) and Zaragoza (41C).

Spain’s eastern coastal regions such as Valencia and Catalonia will be spared slightly from the extreme heat on Thursday – with average temperatures ranging from 31C to 34C – but the mercury will inch up there as well on Friday and Saturday.

It’s going to be a hard few days of sleep for many people across Spain with nighttime temperatures expected to remain around 25C in much of the country.