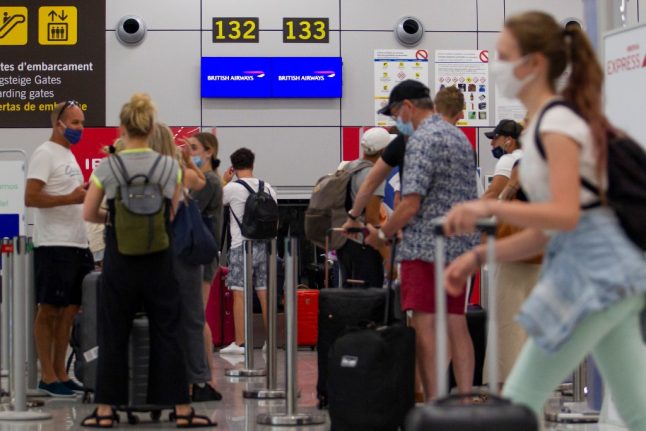 In a press conference on Wednesday August 5th, the Swiss government announced the inclusion of mainland Spain onto its quarantine list.

But Swiss tourists returning from the Canary and Balearic Islands – which have a far lower Covid-19 infection rate than the most affected regions of Aragón, Catalonia and Navarre – will not be required to quarantine for 10 days.

Austria on Thursday August 6th announced it would issue a travel warning for mainland Spain, becoming the latest country to do so amid a rise in new coronavirus cases in the fellow EU member.

READ MORE: Health measures at Spanish airports – What to expect when you fly to Spain

Travellers from mainland Spain must show a negative coronavirus test from Monday August 10th, the foreign ministry said, or else undergo a 14-day mandatory quarantine. Spain's Balearic or Canary islands are again excluded from the measure.

Danish authorities announced on Thursday August 6th that they now advise against non-essential travel to Spain due to the overall increase in Covid-19 infections in the country, although they have not imposed any quarantine for returning travellers.

The UK government abruptly decided on Saturday July 25th to impose a blanket 14-day quarantine for British tourists returning from their holidays in Spain. The measure applies to tourists flying back to England, Scotland, Northern Ireland and Wales.

They are also now discouraging travel to all of Spain, even areas with a lower cumulative infection rate than the UK.

“Non-essential tourist travel to the autonomous communities of Aragon, Catalonia and Navarra are currently discouraged due to renewed high levels of infections and local lockdowns,” a statement said.

Germany has since updated its travel advice again, announcing compulsory PCR tests at German airports for tourists returning from any of the three blacklisted regions in Spain.

READ MORE: Do I need to cancel my holiday in Spain?

On Friday July 24th, the French government asked its citizens not to cross over into Spain to visit Catalonia “until the situation improved in the territory”.

French Prime Minister Jean Castex has not ruled out closing the border either.

Ireland has lifted its 14-day quarantine requirement for tourists returning from Italy and Greece but for those heading back from Spain the self-isolation measure remains in place.

The Norwegian government on Friday July 24th renewed its ten-day quarantine requirement for its nationals who visit Spain.

On Tuesday July 28th the Dutch Foreign Affairs Ministry updated its travel advice to “urgently” discourage its citizens from visiting Barcelona and its surrounding area “for tourism”.

Belgian authorities have banned their citizens from travelling to Huesca in Aragón and Lleida in Catalonia.

Those who do will have to undergo 14 days of self-isolation and a PCR test when they return.

They have also asked their citizens to take extra precautions if visiting other parts of Aragón and Catalonia as well as other regions in Spain (Basque Country, Navarre, La Rioja and Extremadura).

Finland has kept its borders closed to people travelling from Spain since the start of the pandemic and continues to discourage its citizens from non-essential travel.

Polish authorities are also discouraging travel to Catalonia given the “rapid increase of Covid-19 cases in the region including in the cities of Barcelona and Lleida”.

Czech authorities have kept Spain off the list of countries with a high epidemiological risk for the coronavirus, but they do require anyone travelling from Spain to the Czech nation for work to undergo a PCR test which comes back negative or to spend two weeks in quarantine.

The PCR test or quarantine isn't required for tourists from Spain or for those who transit through the country, the Spanish Embassy in Prague reported.

The test, which is also required for self-employed workers, must be carried out “within the territory of the Czech Republic and must not be more than 4 days old,” the message states.

“In the case of mixed couples (a Czech citizen and a Spaniard) only the Spanish worker will have to present the negative test before his employer,” according to the embassy, ​​adding that the measures may be reviewed in mid August.