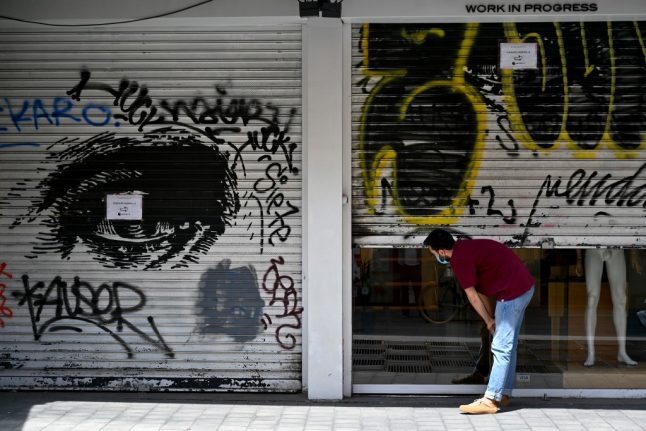 The National Statistics Institute (INE) reported that the number of unemployed rose by only 55,000 between April and June to 3.4 million.

That pushed the unemployment rate in the eurozone's fourth-largest economy to 15.3 percent from 14.4 percent in the first quarter.

But those figures significantly underestimate the impact of the virus on the Spanish job market which registered a 1.07 million drop in the number of people employed during the second quarter, the INE said.

The unemployment data is based on surveys, not claims for benefits, and the survey counts only people actively seeking a job as unemployed. As the lockdowns imposed to stop the spread of coronavirus kept people from hunting for jobs, they were not considered as unemployed by the survey.

It also does not take into account the millions of workers on the government furlough scheme that was put in place to avoid massive layoffs at firms hit by the lockdown.

“The figure is horrible, without a doubt the worst in history,” Pepe Alvarez, the leader of the UGT union, Spain's second-biggest, told radio Cadena Ser.

In the second quarter, the number of hours worked experienced “an unprecedented fall” of nearly 23 percent, the INE said.

Although all sectors of the economy were hit, the damage was particularly acute in the services sector where nearly 817,000 jobs were lost.

This includes shops and restaurants that were closed for most of the lockdown as well as the tourism sector, a pillar of the Spanish economy which accounts for 12 percent of GDP.

Construction and industry lost more than 100,000 jobs, while the impact on the agricultural sector was less, with 21,400 jobs gone.

“Up until now we thought the pandemic would ease and we could set in motion an economic recovery, and that is becoming more difficult each day,” Alvarez said.

A recent spike in infections prompted Britain on Saturday to impose a quarantine on all travellers coming back from Spain, dealing a major blow to the Spanish tourism industry.

British tourists are the largest national group of visitors, with 18 million of them taking a Spanish holiday in 2019.

And on Tuesday Germany's foreign ministry advised against travel to parts of Spain, including popular tourist destination Catalonia.

The latest unemployment figures “confirm that the recovery in jobs and the economy will be slow,” Javier Blasco, the director of the Adecco Group Institute, part of temporary staffing firm Adecco Group, said in a statement.

Economy Minister Nadia Calvino said Tuesday's figures “reflect what happened in the past”, adding that more recent economic indicators “confirm the tendency of an economic recovery”.

“The worst moment for the labour market took place at the end of April,” she added.

The crisis has undermined the already fragile recovery of Spain's labour market which in 2013 registered an unemployment rate of 27 percent.

Since then, the situation has improved, with the rate dropping to 13.8 percent at the end of 2019, its best figure in years — although still the second-highest in the eurozone after Greece.

The International Monetary Fund (IMF) estimates unemployment in Spain could soar to 20.8 percent in 2020, while the government expects a figure of 19 percent.