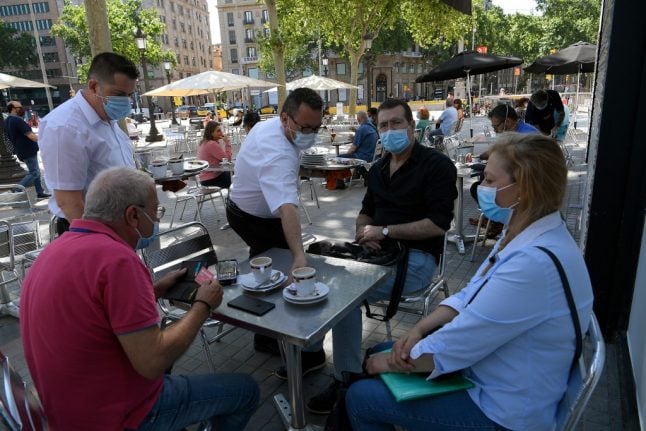 Madrid Community President Isabel Díaz Ayuso announced on Tuesday that the 6.6 million inhabitants in the Spanish capital and surrounding areas will have to wear face masks at all times in public from Thursday July 30th.

“From now on, we are going to make mask-wearing obligatory in all public spaces although we are aware that the vast majority of Madrid residents are already doing so,” Díaz Ayuso told reporters.

Fifteen out of Spain’s 17 autonomous communities had already passed legislation to make masks compulsory for everyone over the age of six, except for people with respiratory and other health conditions and in situations where wearing a mask is “incompatible” (high-intensity outdoors sports, eating, drinking etc).

But until now Madrid – together with the Canary Islands – had preferred to stick to the original nationwide legislation introduced in May which required masks to be worn in all indoor public spaces but not outdoors when the safety distance of 1.5 metres could be kept.

READ MORE: Why Madrid and the Canary Islands haven’t made masks mandatory at all times

The legislation will also mean people have to wear masks even while sat down at a bar terrace, a measure which isn't required in most other Spanish regions.

Customers will only be allowed to remove their masks while consuming food, drinks or smoking.

Gatherings at bar terraces will now also be limited to groups of 10.

It remains unclear yet if the fine for not wearing a mask in Madrid will be €100 as in the rest of Spain (except for the Canaries).

Ayuso also recommended imposing a limit of 10 on all gatherings, whether in public or at a private home, in a move echoing restrictions in the first phase of the rollback.

Bar terraces and nightclubs will have to respect a 1:30 am (2330 GMT) curfew and customers will have to show ID and leave their contact details to ensure traceability if there is an outbreak linked to the establishment.

“The key now is to avoid being locked down again, to put a battery of emergency measures on the table to avoid going backwards,” Diaz Ayuso said. Although badly hit when the virus first took hold, Madrid has been less affected by the recent outbreaks, but has nonetheless decided to prepare a field hospital at a huge conference centre on the city's eastern outskirts.

Díaz Ayuso made the announcement as active coronavirus outbreaks in Madrid rose to 11 from 7 last Friday, with 128 patients hospitalised and 27 in the ICU in the region.

The regional president also said her government was planning to launch a “Covid-19 booklet” which would become almost like an immunity passport for those who have tested positive for the virus, an idea which has already been rejected by the World Health Organisation.

“Anyone who isn’t contagious will be able to continue leading a normal life,” Ayuso said.

“With this booklet it will be much easier to access gyms, museums, closed spaces.

“It is an experimental project, so that those who have recovered from the disease and are undergoing PCR tests have the possibility of having this booklet.”