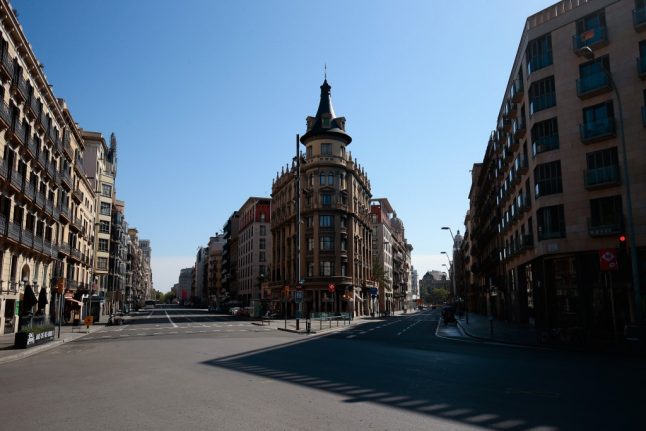 “We’re facing the ten most decisive days of the summer in the sense that we’re in a critical situation,” Catalan president Quim Torra said at a press conference on Monday.

“It’s in our hands, in terms of our civic and historical responsibility, to stop this situation from worsening and to prevent the regression that nobody wants for our country.”

It’s unclear whether Torra was referring to Catalonia or Spain as “our country” but by “regression” the regional leader was quite possibly speaking of a return to lockdown, although – as has become common among Spanish politicians – he stopped short of explicitly using the word “confinamiento” (lockdown).

However, the fact that on several occasions he referred to returning to the situation “in March” suggests that the Catalan leader was indeed speaking of a full lockdown rather than just stricter mobility measures.

“Figuratively speaking, we’re in the precursor stage of what we faced in March and we all know what happened then,” Torra said.

“I’m not ruling out that this will happen again. We’ve got everything on the line. Let’s see if we can avoid having to relive those dark days again, nobody wants that.” Torra’s words suggest that his government will take whatever steps necessary if the region’s infection rate worsens in the next ten days, a wakeup call for all residents to stick to the social distancing and hygiene rules.

But his warning somewhat clashes with the few words he said in English, addressing foreign visitors and assuring them that Catalonia is a responsible tourist destination that follows international recommendations in the fight against the coronavirus.

The only exceptions according to Torra are where the region’s most serious outbreaks are: Segrià (Lérida/Lleida), Figueres (Girona) and Barcelona.

“The rest of Catalonia is not affected and is safe,” he concluded.

Would tourists in Barcelona and other parts of Catalonia be able to get out if a sudden lockdown was imposed and sudden flight cancellations ensued?

In recent days Germany, Belgium, France, the Netherlands and the UK have either advised against travel to Catalonia or introduced quarantine for returning tourists.

Foreign governments have been spurred to introduce the warnings and restrictions for Catalonia given that outbreaks that started in early July have still not been fully controlled, despite quickly implemented local lockdowns.

In Barcelona’s case, Catalonia’s regional government urged the 3 million people living in its metropolitan area on July 17th to stay at home as much as possible in a bid to stop a spike in infections in the capital.

Cinemas, theatres and nightclubs were also closed, the seating capacity for bars and restaurants was halved and gatherings of more than 10 people were banned. Could Catalonia's 7.5 million inhabitants return to a full lockdown like the one in March?

The latest coronavirus figures for Catalonia from Tuesday July 28th are not promising either: 1,055 more infections and 22 deaths.

The region’s cumulative infection rate for the past seven days is 137 per 100,000 inhabitants, second only to neighbouring Aragón where it is 334 per 100,000. Catalonia also has nearly half of all new Covid-19 cases in Spain.

The municipality of Castelldefels, 15 minutes’ drive from Barcelona, has even asked Catalonia’s regional government to impose restrictions on its inhabitants to combat a spike in cases.

So far the Catalan government has been prepared to quickly impose localised lockdowns only in areas with concerning outbreaks, rather than in whole provinces or the region as a whole.

But with infections still rising and Torra’s ten-day deadline looming, a full strict lockdown (or a return to one of the early phases of lockdown de-escalation) in Catalonia cannot be ruled out.

Catalonia's government has started easing some restrictions in the region after measures led to a “downward trend” of new coronavirus cases in recent days.

Lockdown in the city of Lleida and another six municipalities of the badly-hit area of Segrià was lifted on Wednesday July 29th.

The ban on cultural and sports activities in Lleida province and Barcelona's metropolitan area has also now been scrapped.

Bar and restaurant terraces have now been allowed to operate at 50 percent capacity as well.

“We've been able to stabilise the curve in Lleida, but we've got to be careful,” Catalan health chief Alba Vergés said on Wednesday.

“The pressure on its health centres is very high. We cannot let our guard down with this situation.”