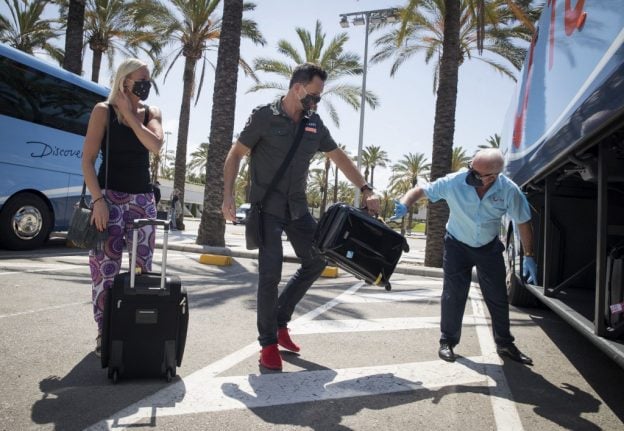 “Non-essential tourist travel to the autonomous communities of Aragon, Catalonia and Navarra are currently discouraged due to renewed high levels of infections and local lockdowns,” a statement said.

“We must prevent that the virus once again spreads rapidly and uncontrollably,” Robert Koch Institute head Lothar Wieler told reporters.

The RKI chief said Germans bringing the virus back from their summer holidays was one reason for the surge in cases, but he also pointed to outbreaks happening at workplaces and open-air parties.

Spain's cumulative coronavirus rate has been growing in recent weeks, but with large regional disparities.

The travel advice by the German government follows the UK's sudden decision on Saturday to impose a 14-day quarantine on British holidaymakers returning from Spain.

The Spanish government is fighting to save the country's tourism industry, arguing that other popular holiday hotspots such as the Canary Islands, the Balearic Islands, Andalusia and the Valencia region have a far lower rate of infections.

Berlin has taken great pride in keeping the fatality numbers low, crediting its world-class health system and widespread early testing for the success.

But Wieler said other countries such as Israel had shown how quickly the situation can change.

Over the last seven days, Germany has registered an average of 557 new cases a day, up from around 350 in early June.

“We don't know yet if this is the beginning of a second wave but of course it could be,” Wieler said.

“But I am optimistic that if we follow the hygiene rules we can prevent it, it's up to us.”

Germany has fared better than many of its neighbours in suppressing the virus, but Wieler urged citizens not to squander the progress following a spike numbers in recent weeks.

“It's in our hands how the pandemic evolves in Germany,” Wieler said, calling on Germans to stick with prevention measures such as washing hands and keeping a safe distance.

Face masks should be worn not only indoors, but also outdoors, if the recommended 1.5-metre (5-foot) distancing cannot be maintained, he said, in a subtle update of the prior advice.

The stark warning comes as countries around the world grapple with a surge in infections, fuelling fears of a dreaded second wave.