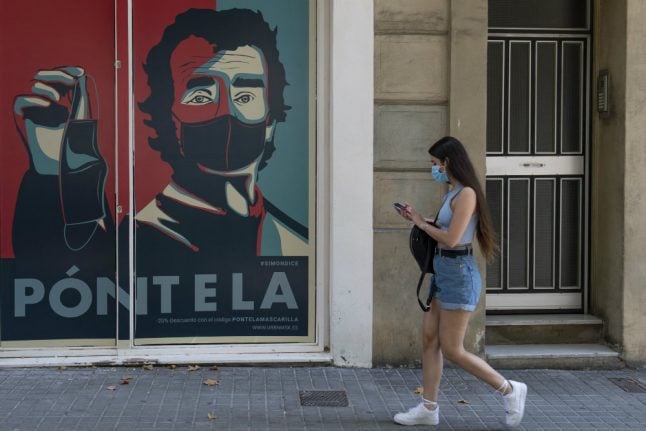 A woman wearing a face mask walks past a placard in Barcelona. Photo: AFP

The Swedish regions of Kalmar, Värmland, Örebro and Östergötland have been given the all clear for travel from Norway and are therefore now included along with existing ‘open’ regions Skåne, Blekinge and Kronoberg.

Norway’s health authorities judge countries – or regions, in the case of fellow Nordic countries – as 'green' if the rate of new coronavirus infections is less than 20 cases per 100,000 people, meaning Norwegian residents can travel there.

European countries which do not meet this criteria are classed as 'red', meaning the Ministry of Foreign Affairs advises against travel that is not strictly necessary to these countries and self-quarantine is required for travellers returning or arriving from them.

Some of the ‘green’ Swedish regions have shown higher rates than 20 cases per 100,000 people in the last two weeks, NRK reports. But they have nevertheless been designated safe for travel following an “overall assessment”.

“The reason why we have advised this is that we have seen a sharp downward recent trend. These regions come under 20 cases (per 100,000 people, during the current week) if the trend continues,” consultant Are Berg of the Norwegian Institute for Public Health (FHI) said via the authority’s website.

Hungary’s status is also changed from ‘red’ to ‘green’ in the new update.

Authorities in Norway now advise against travel to Spain and Andorra, however. That is due in part to increased infection spread in some parts of northern Spain, particularly in the northern regions Aragón and Catalonia.

Most of Spain's provinces have had new Covid-19 outbreaks since the country ended its state of alarm and lockdown on June 21st (200 active outbreaks nationwide currently).

As a result, Spanish authorities have made face masks mandatory in all indoor and outdoor spaces across Spain, except for in the Canary Islands and Madrid where they aren't always obligatory in public.

The increase in the number of cases in Spain means that the country exceeds the limit value that FHI has set at 20 cases per 100,000 inhabitants in the last two weeks.

Spain is now at 30.9 cases per 100,000, according to July 24th figures from the European Centre for Disease Prevention and Control (ECDC).

The change means that travellers from Spain to Norway must now quarantine for ten days upon return. The quarantine rule is not applied retroactively and will come into effect from the time of implementation on Friday.

Everyone who arrives in Norway from abroad, with the exception of ‘green’ areas in Europe with a sufficiently low spread of infection, must home quarantine for ten days.

The list of countries or regions exempt from the quarantine obligation is reviewed every 14 days.