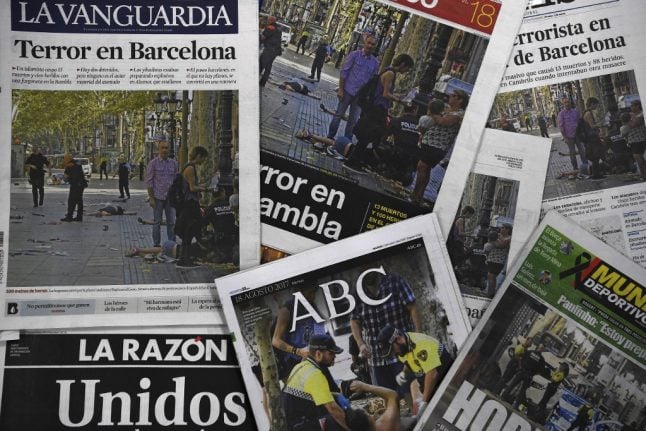 Frontpages of Spanish newspapers the day after a van ploughed into the crowd, killing 14 people and injuring over 100 on the Rambla boulevard in Barcelona. Photo: AFP

The heaviest penalty would be reserved for Mohamed Houli Chemlal who stands accused of belonging to a jihadi organisation and possessing explosives.

Chemlal, who was 21 at the time of the attacks, survived a blast at the house where the cell was preparing explosives.

They also want Driss Oukabir, who was 28 at the time and is facing the same charges, jailed for 36 years for renting the van used by Younes Abouyaaqoub to ram pedestrians on Barcelona's famed Las Ramblas boulevard on August 17, 2017.

Abouyaaqoub, 22, went on the run but was shot dead by police four days later.

They also want an eight-year jail sentence for Said Ben Iazza for collaborating with a terror group on grounds he lent them his van and ID.

The trial is to begin later this year but the date has not yet been set.

Claimed by the Islamic State group, the double attacks that killed 16 and wounded 140 took place on August 17 and 18 in Barcelona and Cambrils, a seaside resort about 100 kilometres (60 miles) to the south.

After the hit-and-run attack in Barcelona, which claimed 14 lives, Abouyaaqoub fled in a car he stole after killing the driver.

Several hours later, five of his accomplices staged a second attack, ramming pedestrians in Cambrils and stabbing a woman who later died of her injuries.

All five were shot dead by police.

Prosecutors say many of the young men, most of whom were of Moroccan origin, were radicalised by 44-year-old imam Abdelbaki Es Satty in the sleepy town of Ripoll in northern Catalonia.

Chemlal told investigators they had been planning attacks “on an even greater scale”, with sites like Barcelona's Sagrada Familia basilica, the stadiums of Barcelona and Real Madrid football clubs or the Eiffel Tower in Paris among the suspected targets.

But the accidental explosion at a house in Alcanar, about 100 kilometres south of Cambrils — which killed Satty and another man — pushed the group to hurriedly improvise the two attacks.