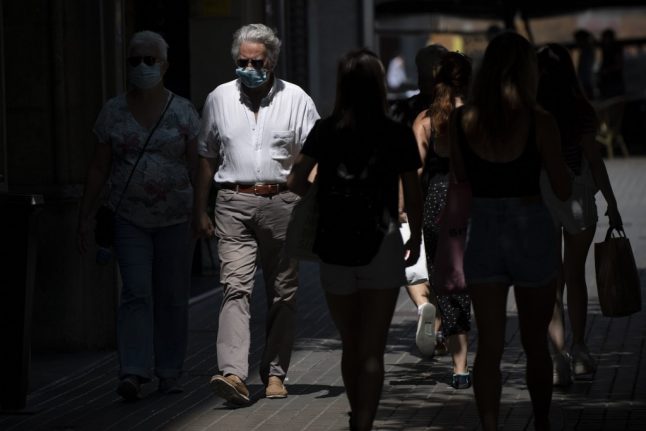 Spain’s Health Ministry recorded 730 new coronavirus infections on Wednesday, up from 529 the previous day and confirming that the country is reporting infection rates similar to those during its state of alarm and lockdown.

The worst numbers are reported in the northern regions of Aragón and Navarre, with 309 and 132 new infections respectively, as the daily figures in Catalonia dropped to 58.

In fact, the Navarran region – which shares a border with the France, the Basque Country, Aragón and La Rioja – surpassed Catalonia in terms of daily Covid-19 infections on Tuesday as well, now only behind Aragón.

On Thursday Navarre’s regional government reimposed Phase 2 lockdown restrictions in the Mendillorri neighbourhood of the capital Pamplona, where an outbreak has resulted in 122 positives.

According to Spanish Health Minister Salvador Illa, the number of active outbreaks across Spain is now 224, up from 201 on Monday, with 2,622 associated coronavirus infections.

In the absence of daily infection reports over the weekend and other unaccounted data, some epidemiologists consider cumulative rates more accurate than absolute numbers as they consolidate the data.

But the evidence suggests that on in that regard the virus is indeed resurging in Spain as on Monday Spanish health officials reported that the infection rate had tripled in just over two weeks, from 8,76 per 100,000 inhabitants on July 3rd to 27,39 per 100,000 in recent days.

Spain’s Health Ministry reported on Wednesday 288 Covid-19 hospitalisations over the past seven days and 11 Covid-19 patients in the ICU.

“The pressure on hospitals remains low,” Spanish deputy health emergency head Maria Sierra said on Monday, with the exception of the city of Lleida in Catalonia where one of the country’s main outbreaks is located.