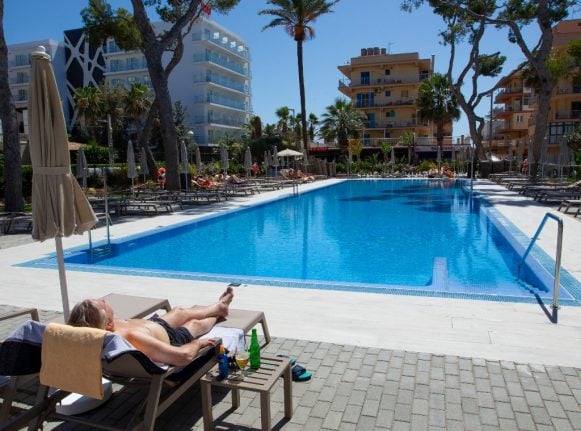 Spain may be open to international tourism but its recent surge in Covid-19 infections and outbreaks, coupled with obligatory face mask rules across most of the country, are putting tourists off from enjoying their time in the sun.

Hotel booking cancellations have reached 64 percent across Spain and 70 percent in the Balearic Islands, according to a new study by tourism market research group Dingus.

Tourism Minister Reyes Maroto has also acknowledged that some of Spain’s main tourist hotspots are suffering cancellations due to the uncertainty felt by foreign visitors.

“I hope that the numbers will improve as we control the outbreaks,” Maroto told a press conference on Wednesday.

“Right now, the outbreaks continue to generate a feeling of insecurity and cancellations are taking place in some destinations.”

In the Balearic Islands of Mallorca, Menorca, Ibiza and Formentera overnight stays at hotels fell by 99 percent in June compared to figures for the same month last year, although this is largely due to the fact that Spain only opened its borders to EU tourists and allowed cross-regional travel on June 21st.

However, hotel occupancy in July has been far from positive – around 35 percent – with many hotels in Mallorca reporting more cancellations than bookings.

“The situation has turned on its head in the last week and we have gone from having more bookings than cancellations to the complete opposite,” the Balearic Islands’ Association of Hotel Chains (ACH) said on Tuesday.

“The new commercial policy implemented in the Balearics regarding the cancellation of bookings during the current coronavirus crisis enables customers to cancel reservations at no added cost.

“German, Austrian, Swiss, French and Italian tourists are the most affected by this uncertainty.” Apart from their fear of travel in the present climate, ACH says the sudden announcement of safety measures such as compulsory face masks in public are putting tourists off from their trips to Spain.

The association added that many hoteliers are “completely paralysed because the tourism situation has changed”, resulting in many hotel chains closing their doors in August or not reopening as scheduled.

It’s a similar situation in Spain’s other archipelago popular with tourists – the Canary Islands – where they are also having more cancellations than bookings right now.

According to Spain’s airport authority Aena, air traffic in July has been 40 percent of its usual rate, but the number of passengers at Spanish airports is barely 20 percent when compared to July 2019 figures.

In essence, the planes are flying but they’re half empty.

In Barcelona, only 37 hotels opened at the start of the tourist season, with only 10 percent occupancy. In Madrid 100 hotels reopened in July.

The number of rooms currently available across Spain is 32,508, 16.7 percent of the total.

Many hotels in Spain had hoped to open in August, giving tourists a chance to recover their trust in the country as a safe destination and thus guarantee they would have a better occupancy rate.

But the recent surge in outbreaks in Spain has meant many holidaymakers are now cancelling or reconsidering their trips, leaving one question for concerned hoteliers: Is it actually worth opening at all this summer?