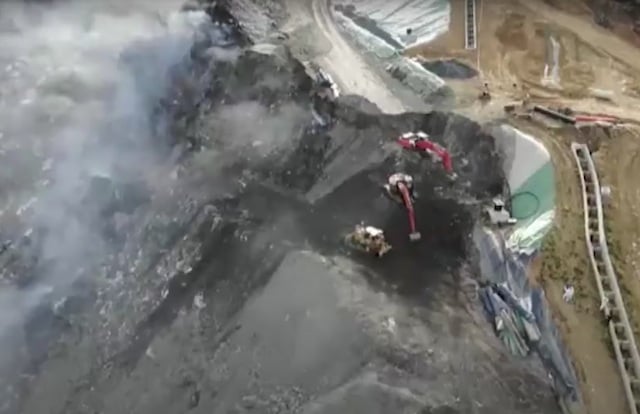 Basque Ertzaintza police on Tuesday arrested the heads of refuse company VERTER Recycling 2002 in the town of Zaldibar in Vizcaya province, following a court order for their detention on the same day.

The dumping ground which they run was the scene of a landslide in February which saw thousands tonnes of rubbish collapse, burying employees Alberto Sololuze and Joaquín Beltrán under the refuse.

More than five months after the tragedy, rescue operations have been unable to recover their bodies.

According to sources close to the investigation, the owner, the site manager and the dumping ground’s technical director are the three people arrested.

This follows a police report in June which pointed to “signs of criminality” relating to the site’s management, in terms of environmental breaches and workers’ rights.

In an interview on Spanish TV channel La Sexta, the sister-in-law of one of the buried workers said he had already warned his superiors there were cracks in the rubbish mound and that he had heard noises that indicated there could be a landslide.

“His family is devastated, he didn’t tell them about the cracks,” Andrea Ropero said.

“I do know that he’d noticed that something wasn’t right with the dumping site and he’d told the owner.

“They were waiting to receive a safety report from a surveyor but the owner thought there was no risk in continuing with work and that’s what caused the tragedy.”

No official report has given an explanation yet as to what could have caused the massive landslide.

Although the rescue operation to retrieve the men’s bodies began on the same day, the instability of the terrain, fires that broke out and the discovery of asbestos at the site have reportedly been blamed for the lack of results.

But in a statement to the press, the men’s families said the rescue operation has been “complete nonsense”, “poorly coordinated from high up” and “inadequate”, considering it inadmissible that their loved ones remain “buried in rubbish” more than five months later.

“They’ve been running around like headless chickens,” Ropero added.

“Nobody at the company has given us any explanation. It’s obvious that their greed led to this tragedy.

“It’s a dumping ground that has a life cycle of 35 years but in its 13 years of existence it is already at 75 percent capacity.”