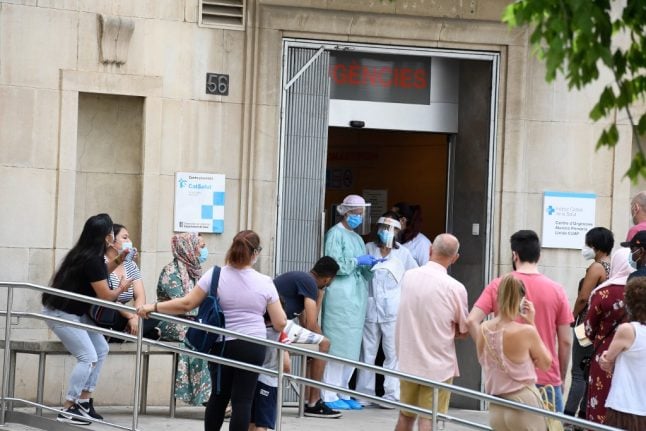 Healthcare workers and patients outside a primary care centre in Lérida (Catalonia), where one of Spain's main Covid-19 outbreaks is. Photo: AFP

The resurgence of coronavirus in Spain has been confirmed by the latest data from the country’s Health Ministry, which shows that Covid infections in Spain have tripled in under three weeks after the country ended its state of alarm and lockdown measures.

The cumulative incidence of coronavirus cases among the Spanish population has gone from 8,76 per 100,000 inhabitants on July 3rd to 27,39 per 100,000 in recent days, Spanish deputy health emergency head Maria Sierra said at a press conference.

According to the World Health Organization (WHO), Spain is the only EU country (apart from Luxembourg) where the number of coronavirus cases is on the up, a rise of 103 percent in its cumulative infection incidence over a 14-day period.

Cumulative rates are considered more accurate than absolute numbers by epidemiologists as they consolidate the data and iron out daily spikes or drops which don't necessarily relate to the transmission of the virus.

The rate is particularly high in the Catalan cities of Lleida, l’Hospitalet and Barcelona, where the 803 infections confirmed by PCR test from July 9th to 15th pushed the coronavirus incidence up to 49 per 100,000 inhabitants in the capital.

On Friday Catalan officials urged its citizens to stay at home as they ordered the closure of cinemas, theatres and nightclubs to slow down the surge of the virus.

But a large number of residents instead chose to leave the city for the Costa Brava, fearing a full mandatory lockdown in the city.


Spain’s health officials recorded 4,581 new cases over the weekend across Spain, with 201 active outbreaks across its territory, although not all of Spain’s 50 provinces have reported clusters.

“We’re worried about the outbreaks in Aragón and Cataluña,” Health Minister Salvador Illa said in his latest press conference, a message which has been repeated on numerous occasions over the past two weeks as the two northern regions have struggled to contain their transmission rates.

“Where measures have been relaxed is where these clusters appear,” Illa added.

A number of Spanish regions have reintroduced restrictions on nightclubs and bars as a result, in some cases limiting capacity and in others ordering their total closure.

Spain’s Health Ministry reported a further 529 new coronavirus infections on Tuesday – almost half of them in Aragón and Catalonia – a drop of 156 compared to Monday’s figures. There have been 16 Covid-19 deaths in Spain over the past week.

The lowest cumulative incidence of coronavirus cases in Spain was recorded on June 25th – 7,74 per 100,000 – four days after Spain ended its state of alarm.