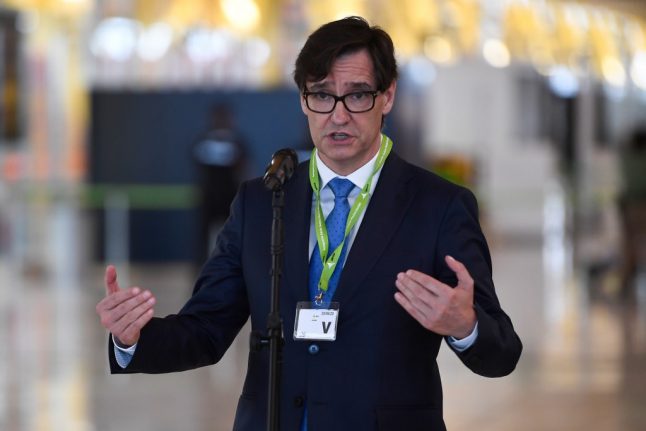 Spanish Health Minister Salvador Illa speaks to the press at Barajas airport in Madrid a day ahead of his government ending Spain's state of alarm on June 21st. Photo: AFP

Spanish Health Minister Salvador Illa has admitted that his administration is “no longer ruling anything out” with regard to the reinstatement of the state of alarm in the country, although this would initially be carried out on a regional scale.

“If we see that the outbreaks escape the control of Spain’s autonomous communities or that some fundamental citizen rights have to be limited, we will act,” he told Spanish radio station COPE.

Illa said there was “deep concern” in his ministry for the more than 150 currently active Covid-19 outbreaks in Spain, especially “the situation in Aragón, Catalonia and in some areas of Barcelona”, where 408 out of Spain’s 580 new infections reported on Thursday were located.

READ MORE: How Spain is planning to stop a second wave of the coronavirus

Spain’s Health Ministry has said that most of these outbreaks are under control but Illa acknowledged that there had been community transmission in Aragón and Catalonia.

At the start of the pandemic, WHO Director-General Tredos Adhanom warned about the problems relating to this type of virus transmission saying “it is more difficult to test all suspected cases and locate their contacts. Measures must be taken to prevent transmission at the community level in order to limit the epidemic to manageable groups”.

“We’re no longer ruling anything out,” Illa stated when asked if the government would reinstate the state of alarm again, which ended on June 21st when the virus was deemed under control.

“We’re not in that scenario yet but yes, we could get there.”

Around 160,000 people in the Catalan city of Lleida returned to home confinement on Wednesday as authorities tried to control a fresh surge in coronavirus infections in the area, with other local lockdowns having been enforced in A Mariña in northwest Spain and in Huesca province in reaction to quickly spreading outbreaks.

“The virus is still with us. We’re recording an increase in cases, 70 percent of them are asymptomatic and are being diagnosed through active searches, which means that early detection works. They’re less serious cases.”

However, the number of hospitalisations in the past week has been 196 and ICU admissions have crawled up to 17, both weekly figures representing the highest numbers seen since Spain's Health Ministry changed the way it kept count of the data on May 25th.

Illa has previously said how important it is that Spaniards don’t “lose respect” for the virus, giving the example of Cádiz football fans crowding the streets of the southern city to celebrate the team’s promotion as the way things shouldn’t be done.

Spain’s coronavirus death toll confirmed by PCR testing currently stands at 28,416 and total infections are 258,855 since the pandemic began.