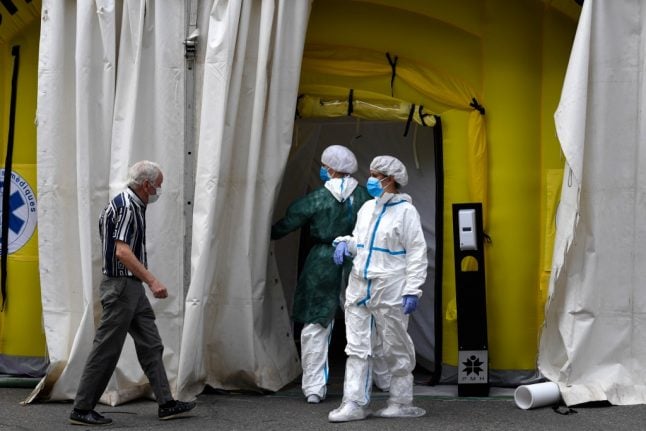 With some of the worst death and infection figures in the world at the start of the global pandemic, followed by a sharp decrease in cases by the time the state of alarm had ended in June, it could be easy to assume that Spain had put the worst of Covid-19 behind it.

But the evidence suggests that the virus is still far from being restrained or under control in the Iberian nation, the latest figures pointing to 2,045 new Covid-19 infections over a three-day period and 120 active outbreaks across many areas around the country.

The situation in Catalonia, especially in Lérida province, is particularly worrying to Spanish authorities as infections rose by 800 there in just 24 hours on Sunday.

The same concern is shared for the situation in Aragon as most of the region has had to return to phase 2 of the de-escalation plan and its restrictive measures due to a surge in cases.

Both regions showcase how quickly the apparent sense of control on Covid-19 can be lost, despite all the existing safety measures, and how more has to be done to prevent a second wave of the virus sweeping across Spain.

Spain’s left-wing coalition government knows this, and with the looming threat of being accused by its political opponents of acting too late again, a new plan has been drawn up.

Spain has reported more than 303,000 Covid-19 infections since the pandemic began and 28,406 deaths, the seventh highest death toll in the world behind the US, Brazil, UK, Mexico, Italy and France.

Spanish Health Minister Salvador Illa on Monday presented his regional counterparts with an “early action” plan for a potential second wave of the coronavirus.

The idea is to “order” the measures and available resources in this current “control stage” in order to give Spain’s 17 autonomous communities some guidance in the event of infections reaching pandemic levels again.

As many legislative powers relating to the handling of the health crisis are devolved to regional governments, this plan will ensure that there is open communication between regions and fast implementation of measures relating to everything from PPEs to medical personnel.

If infections rose and the situation worsened, Spain’s central government would take greater control in the handling of the pandemic, with the prospect of the state of alarm being reintroduced not preferred but still not impossible.

The Spanish government is preparing to launch a campaign to increase the number of seasonal flu vaccines among the country’s 47 million inhabitants, so as to avoid “the eventual clash of two epidemics”, the common flu and Covid-19.

The plan is to vaccinate 75 percent of the country’s over 65 population and medical staff as well as 60 percent of pregnant women and high-risk groups.

Primary care workers in Spain will be essential to detect the early signs of a quickly spreading outbreak.

There will be weekly meetings between national regional health officials to assess if there are indicators to suggest that infections could start growing rapidly.

The government plan also stresses the need for sufficient public health and laboratory workers for this quick surveillance and diagnosis system to work.

Furthermore, there are contingency plans ready in case a region's healthcare system is overwhelmed by a spike in coronavirus cases, with plans to allocate more hospital beds and ICU units to Covid-19 patients as well as protective equipment.

A nationwide reserve of PPEs and medical supplies

Spain was caught off guard and short-supplied when the pandemic initially struck.

At one point acquiring a face mask was near impossible as the Spanish government scrambled to buy PPEs from overseas.

This material reserve would also cover 25 percent of the total average consumption of face masks, protective glasses, gloves and gowns.

Until there is a specific vaccine developed for Covid-19, Spanish health authorities will also store the medication that is currently being prescribed for the illness: Cisatracurium, Midazolam, Propofol and Dexmedetomidine.

Partial or total closure of schools

All schools across Spain are due to fully open in September but an uncontrolled outbreak of Covid-19 would result in all educational facilities partially or completely closing again in a “demarcated area” where infections are rising.

If a pupil tests positive for Covid-19, they as well as their close contacts would be placed under quarantine.

If PCR tests show there have been more infections, the closure would be implemented for the affected class or the whole school.

In the case of nursing homes in Spain, a single Covid-19 infection is already considered an outbreak.

The infected person is isolated and their close contacts are quarantined and their visitors are traced.

Under the new action plan, family and friends would not be allowed to visit their elders at care homes until the outbreak was deemed under control.

Face masks in public at all times

A growing number of Spanish regional governments are choosing to make face masks compulsory in all public spaces, with the evidence suggesting the measure could eventually be implemented nationwide.

READ MORE: Where in Spain are face masks compulsory at all times?

Since May 20th, masks have been mandatory across Spain in indoor public spaces and outdoors when people cannot avoid being closer than 1.5 metres, but these new regional decrees are taking it one step further by making wearing a face mask compulsory even when the safety distance can be kept.

Although some regional governments haven’t fully clarified every situation where face masks are compulsory, the general consensus so far has been that masks don’t have to be worn in situations where it's “incompatible”, such as at the beach or swimming pool or while eating or drinking in public.

People with respiratory and other health issues that can be worsened by wearing a mask are also exempt.

The aim for Spanish authorities is to avoid at all costs another strict nationwide lockdown similar to what the country already experienced for two and a half months.

By “surgical” confinement they're referring to enforcing specific measures in buildings, towns and regions rather than in the country as a whole.

Spain's Ministry of Health has acknowledged that outbreaks are unavoidable but assured the public that if infections begin to quickly spread across regions, they will first localise a lockdown rather reimposing the state of alarm all over Spain.