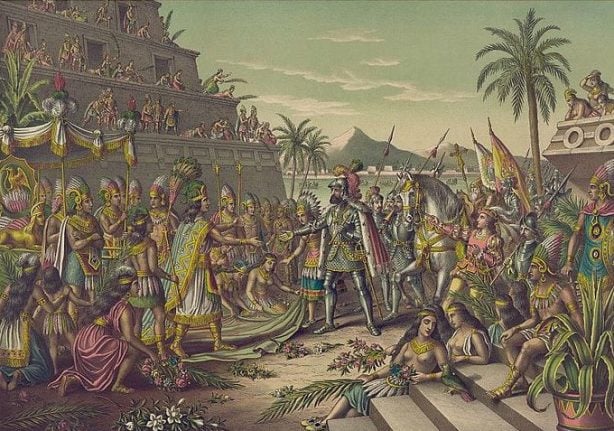 Cortés and his men laid siege to the Aztec capital Tenochtitlan in 1521. Images: Wikimedia

Basalt slab floors were found under the stately building of the Nacional Monte de Piedad, a historic pawn shop in the middle of the capital's central square, during building renovations.

The floors correspond to an open area in the palace of Aztec ruler Axayacatl, who was the father of Montezuma, one of the final rulers of the empire. Experts say that “it was part of an open space of the old Axayacatl Palace, probably a patio,” the National Institute of Anthropology and History (INAH) said.

During excavation, archeologists also found evidence of the home Cortés had at the site after the fall of the Aztec empire. Archeologists noted that the floor was likely made of materials reused from Axayacatl's palace, which, like other sacred Aztec buildings, were razed by the conquistadors.

The discovery was made during reinforcement work on the Nacional Monte de Piedad building, which dates back to 1755.

Cortés first arrived in modern-day Mexico in 1518 on a mission to explore the region's interior for Spanish colonisation.

He and his men laid siege to the Aztec capital Tenochtitlan in 1521 until it surrendered, whereupon they destroyed it, a key event in the fall of the empire.