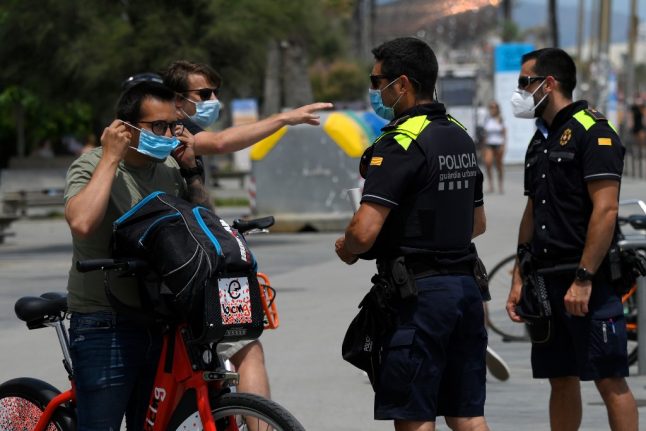 Most of Spain's 17 autonomous communities have either already or are in the process of approving regional legislation which makes face masks a must in practically all situations and places.

Masks are already mandatory across Spain in indoor public spaces and outdoors when people cannot avoid being closer than 1.5 metres, but new regional decrees are taking it one step further by making wearing a face mask compulsory even when the safety distance can be kept.

The sudden measures come as a result of the increase in Covid-19 outbreaks across Spain since the country ended its state of alarm in late June, which on Monday July 13th numbered more than 100 active clusters.

Although some regional governments haven’t fully clarified every situation where face masks are compulsory, the general consensus so far has been that masks don’t have to be worn in situations where it's “incompatible”, such as at the beach or swimming pool or while eating or drinking in public.

People with respiratory and other health issues that can be worsened by wearing a mask are also exempt.

Catalonia was the first autonomous region in Spain to make face masks compulsory in all indoor and outdoor public spaces, a measure which came into force on Thursday July 9th.

It’s compulsory for everyone over the age of six apart from the situations and people mentioned above, and can result in fines of up to €100 for non-compliance. Find out more here.

The Balearic Islands – made up of Mallorca, Menorca, Ibiza and Formentera – followed suit and passed similar legislation which came into force on Monday July 13th.

This has been criticised by hotel and tourism associations, which say that since the news was announced, the holiday islands have seen a steep drop in bookings.

Galicia in Spain’s northwest already has stricter mask wearing rules in place since June 28th when their local government passed a decree that called for face masks to be worn at all times when moving through outdoor public spaces.

Extremadura in Spain’s southwest next to Portugal also made face masks obligatory in all public spaces from Saturday July 11th. In this region it’s also compulsory to wear a mask at swimming pools and it can only be taken off when in the water.

In La Rioja, Spain’s famous wine-producing region in the north, the decree was passed on Monday July 13th and came into effect immediately.

In Murcia, the regional government approved the same legislation on Monday July 13th, which also came into force on the same day.

In the Basque Country, face masks now have to be worn at all times but only in the town of Ordizia where the region’s main outbreak is located.

Where in Spain will face masks become compulsory very soon?

Regional governments in a number of other Spanish autonomous communities have said they will pass similar legislation in the week of July 13th to July 17th.

In Navarre, where a gathering of revellers at the cancelled San Fermín festival has led to a new Covid-19 outbreak, regional authorities have said they will make face masks mandatory during the course of the week without specifying a date.

In Aragón in Spain’s northeast, where the first major post-lockdown outbreak occurred in Huesca province, a new decree on face masks is due to be approved on Monday July 13th and be implemented by Tuesday.

In Andalusia, Spain’s most populated region with 8.5 million inhabitants, the measure was given the green light on Monday by the technical committee assisting the regional Junta government, and will come into effect “within a 24 to 48 hours period”.

Ceuta, one of two Spanish autonomous cities on the north coast of Africa, has announced it will follow suit with what Andalusia decides.

In Melilla, Spain's other autonomous city, it was announced on Monday that masks will become compulsory “by the end of the week”.

In Asturias in Spain’s northwest the measure was given the green light on Sunday July 12th and will be implemented during the course of the week.

The Valencia region in the east and Cantabria in northern Spain were the last autonomous communities to adopt similar measures.

Where in Spain are the standard face mask rules still applicable?

Wearing a face mask in all indoor public spaces and in outdoor spaces where the safety distance of 1.5 metres can’t be kept is still applicable in the following regions: