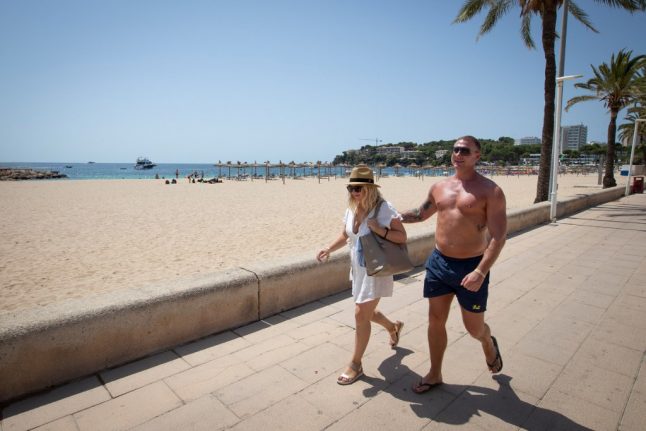 Tourists in the Balearics will have to wear a face mask at all times in public, although the measure is likely to include a couple of exceptions. Photo: AFP

The Balearic government confirmed on Thursday it will follow in the footsteps of its Catalan counterpart and make wearing a face mask compulsory in almost all public spaces.

Masks are already mandatory in Spain in indoor public spaces and outdoors when people cannot avoid being closer than 1.5 metres, but the measure will mean residents and tourists in Mallorca, Menorca, Ibiza and Formentera have to wear a face mask at all times in public from Monday July 13th.

The Balearic Consell de Govern regional government announced as well that there will be fines of €100 for non-compliance as in the case of Catalonia, which on Thursday became the first autonomous community in Spain to make mask wearing mandatory at all times, as the region deals with the most concerning outbreak in the country in Lérida province.

The only exceptions to wearing a mask in public are on beaches and swimming pools, when doing sport and when consuming food and drink at bars and restaurants.

People with respiratory and other health problems whose wellbeing can be affected by wearing a mask are also exempt.

Health authorities in the Balearics are concerned by the proliferation of illegal parties, group street drinking (botellones) and other large gatherings which have stemmed from restrictions imposed on nightclubs and bars.

There are nine active outbreaks in the Mediterranean archipelago according to the latest information from the local health ministry, eight in Mallorca and one in Ibiza.