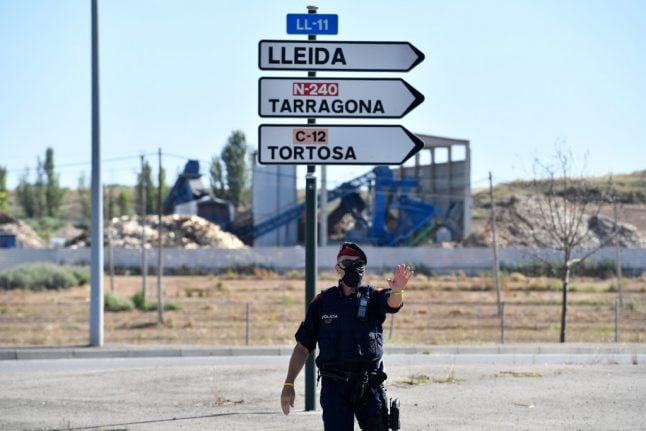 Spain’s Health Minister Salvador Illa acknowledged on Wednesday that the current situation regarding outbreaks in Spain “is worrisome”.

Asked on Catalunya Radio if his government would consider reintroducing the state of alarm in Spain, Illa said “it would be the last resort, but we cannot rule it out”.

For it to happen, there would have to be a “continued transmission rate within a region that was also affecting another autonomous community and that there was no other way to control it” than by reimposing confinement measures, he added.

But of the 67 active outbreaks in Spain on July 8th, some are more concerning than others, with most regional authorities declaring transmission rates to have been mitigated.

Outbreaks not declared under control yet

Lérida: There are at least 524 cases and 14 outbreaks detected in Lérida’s Segriá district, which has been in lockdown since Saturday July 4th. It’s currently the most worrying outbreak in Spain and is likely to spur regional authorities to impose a measure which makes wearing a face mask compulsory across Catalonia.

In Catalonia’s Valle de Arán “comarca” (district) there is another outbreak with 10 people who were infected at a barbecue. Barcelona city has 11 positive cases originating at a slaughterhouse.

Lugo:  The comarca of A Mariña is the centre of the other most concerning outbreak in Spain currently, with a continued increase in infections (currently at 143). A five-day lockdown has technically been imposed in an area encompassing 14 municipalities where 70,000 inhabitants live, although there are reports that in practice this hasn’t happened.

Granada: A total of 93 new infections have been recorded in Granada province. There are 9 outbreaks in total across the territory, with the only one that’s been declared under control being in the capital, where there have been 33 cases.

Almería: There have been several outbreaks across the south-eastern coastal province with 3 to 4 cases in Levante-Alto Almanzora, Pulpí, Huércal-Overa and the latest in Adra.

Mallorca: There is an active outbreak with five positives in Palma de Mallorca and 3 new infections in the town of Inca, and although the numbers are still low Balearic authorities are yet to declare the outbreak under control.

Albacete: Two recent outbreaks in the province are yet to be neutralised.  The first, with five positives started during a family gathering in the municipality of Tarazona de la Mancha. The second has 9 cases in a block of flats that has been isolated.

Valencia: A new outbreak with 10 infections in the municipality of Burjassot is being investigated and hasn’t been controlled yet.

Castellón: An outbreak which started at a family party on June 29th has so far left 27 positives and hasn’t yet been declared under control.

Cáceres: The outbreak in the municipality of Navalmoral de la Mata had been declared under control but has since seen new cases, now totalling 23. They are currently looking for patient zero, a foreign temporary worker who travelled from Almería and evaded isolation.

Badajoz: Seven people were infected at a party and although patient zero has already been located, 11 more cases have been confirmed.

Pamplona:  In total there are 60 new infections in three areas – one in the capital Pamplona, ​​another in the north of the region and another in the town of Sunbilla. The regional government is yet to declare them under control, at a time when Navarre has received criticism for allowing some partygoers to gather for this year’s San Fermín festival.

In the Basque Country

Guipúzcoa:  A new outbreak yet to be controlled has been detected in the municipality of Ordicia, with 34 confirmed positives stemming from a gathering at a bar area. In the same province there is another outbreak with 18 infected in the town of Orio, but that has been stopped in its tracks.

Outbreaks reported as under control

Málaga: The outbreak that began at a Red Cross centre in the southern Spanish city remains under control with a total of 108 new infections. The other cluster is in the nearby town of Casabermeja where there have been seven Covid-19 infections and the outbreak has been controlled.

Huelva: Ten cases stemming from a party have been recorded in the Huelva town of Lepe, nine of which are related to an ‘imported’ infection from another region. Local authorities have said the outbreak is under control.

Cádiz: There have been 26 infections originating at a guesthouse and at an NGO-run apartment in the town of Algeciras, an outbreak which started in late June and has now been declared under control by the Andalusian Regional Government.

Huesca: The first Spanish province to report a worrying increase in cases (374 infections) has now declared its outbreaks in Cinca Medio, Bajo Cinca and La Litera de Huesca under control. These “comarcas” are still under Phase 2 of de-escalation which they were regressed to when infections started to rise.

Zaragoza: The Bajo Aragón-Caspe district has 36 active cases an in the capital Zaragoza there are 9 positive cases, the latter outbreak is being investigated and not yet declared suppressed.

In the Canary Islands

Fuerteventura: The arrival of a boat with infected migrants on the island of Fuerteventura on June 20th led to 34 infections, but the outbreak is now considered neutralised.

Santander:  Fifteen people tested positive from a transmission which started at a block of flats in the Cantabrian capital. They remain under home isolation and their contacts are tracked, leading regional authorities to consider the outbreak stopped in its tracks.

Gerona: The outbreak which was reported in the country of La Garrotxa towards the end of June led to 31 infections, 20 of them belonging to the same company. The affected area has been delimited and reported as under control.

Valladolid: Outbreaks at two care homes have led to 39 confirmed Covid cases. The outbreak is currently under control, although another outbreak has originated at the Río Ortega Hospital in Valladolid, with many reported asymptomatic cases.

Soria: There are three positives in another outbreak in the province. It has been quickly controlled.

There has been an outbreak detected in the capital involving company employees with five confirmed cases. It is considered already controlled.

Valencia:  The outbreak at the meat-packing company in Rafelbuñol which led to 14 Covid cases among the workers has now been controlled.

La Coruña: The town of A Barbanza registered 9 cases in late June but the spread of the virus has been declared contained.

Murcia: There have been at least 32 infections in the capital, but the outbreak has been declared under control.

In the Basque country

Vizcaya: The outbreak in Basurto (Bilbao) has been controlled.

Álava: The spike in cases in Txagorritxu in Vitoria has also been stopped in its tracks.