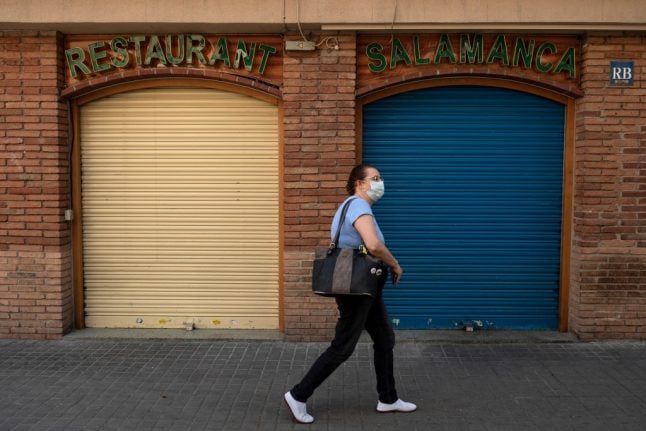 Catalonia has become the first autonomous community in Spain to make face masks compulsory in all indoor and outdoor public spaces – regardless of the safety distance – for everyone over the age of six.

Masks are already mandatory in Spain in indoor public spaces and outdoors when people cannot avoid being closer than 1.5 metres.

But the measure by Catalan authorities has taken it one step further by making wearing a face mask in public mandatory at all times from Thursday July 9th, with fines of up to €100 for non-compliance.

“The idea is that everyone leaves the house with the mask on,” said Catalan Heath Minister Alba Vergés.

Exceptions will be made for people with respiratory and other health conditions and in situations where wearing a mask is “incompatible” such as for doing sport or when eating and drinking at bars and restaurants.

The Catalan government hasn't specified whether tourists and residents have to wear a mask at the beach or swimming pool.

When pushed for answers by local journalists on where the government stands in this regard, Catalonia's deputy director general of Public Health Xavier Llebaria said citizens should exercise “common sense”, wear a mask to the beach or pool, while on the beach promenade and other public spaces but not when it's incompatible with the activity, as in say swimming or tanning.

It also won't be necessary to wear a mask at the workplace or when driving if the people in close proximity are part of your regular family, friends or work circle.

According to Catalan President Quim Torra, the decision will help to deal with the issue of the recent “relaxation” regarding face masks observed among the local population.

On Saturday, 200,000 people in a zone around Lérida, west of Barcelona, were placed under lockdown as more than 1,000 cases of Covid-19 had emerged there since early June.

This spurred Catalonia's regional government to announce on Tuesday that it intended to stop the spread of the virus as mobility in the region grows during the summer months by making face masks compulsory in all outdoor spaces.

“We want to make wearing masks obligatory at all times,” regional government spokeswoman Meritxell Budo said by way of clarification.

“We have noticed some easing up in the use of masks so a tighter measure might be called for,” she explained.

The subject of reimposing home confinement for the whole province of Lérida is also being debated.

“If in two weeks there is no change to the situation, we will have to consider new measures such as home confinement,” said the head of Lérida's Epidemiology Service Pere Godoy on Monday.

Chief Spanish epidemiologist Fernando Simon said Monday he was “very concerned” by the outbreak in Catalonia.

Meanwhile, another 70,000 people are being isolated in Galicia, northwest Spain.

With more than 28,300 deaths from the virus, Spain is one of the countries hit hardest in Europe.

From mid-March until June 21 Spaniards were subjected to one of the strictest lockdowns on the continent.