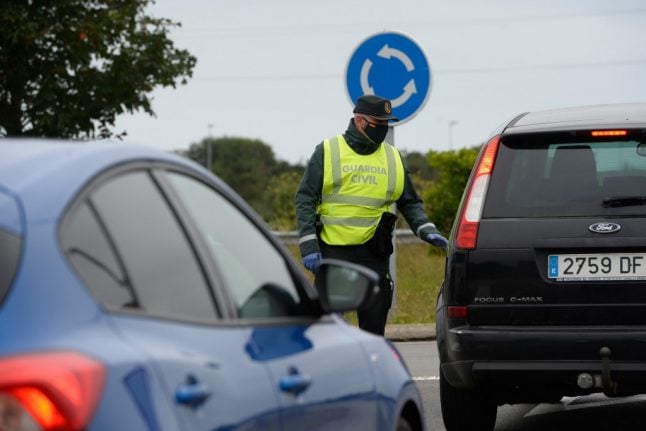 A Spanish Civil Guard controls a checkpoint on the highway between the regions of Galicia and Asturias in Ribadeo on July 6, 2020. AFP

There were 70 outbreaks in different parts of Spain, health authorities said on Monday.

All were small clusters and were under control, regional authorities stressed.

The number of cases in A Maríña in Galicia, which was placed in lockdown on Sunday, rose from 99 yesterday to 119 on Monday, the regional government said.

Catalan authorities placed over 200,000 residents of the province of Segria under confinement on Saturday.

Authorities said they would not discount ordering residents to stay in their homes if the number of cases continued to rise.

Belgium advised anyone who has recently been in Segria to self-isolate for 14 days if they arrived in Belgium.

Staff at Brussels airport were handing out advice papers to travellers who arrived from Spain in case they had recently been in Segria.

Where are the new lockdowns?

On Saturday, the Catalan regional government ordered the confinement of about 200,000 people in the Segria province of Catalonia which includes the city of Lleida. On Sunday, the Galician authorities made a similar order for the province of A Mariña in Lugo, where 71,000 people live.

Two buildings, one in Santander and another in Albacete, have been placed under quarantine. About 50 coronavirus outbreaks are being monitored across Spain.

Why has this happened?

Catalan health authorities said the confinement was imposed after a rise in cases from 3,551 on Thursday to 3,706 on Friday.

In Galicia, the emergency measure was brought in due a sharp rise in cases with 258 recorded by Sunday. According to health authorities in the region, the outbreak was linked to a number of bars in the province.

What does this mean for the people living there?

The people of Segria cannot leave the province, possibly for the next two weeks. They can travel around inside the area, unlike during the original national lockdown in March when they could not leave their homes except to buy food, for emergencies, for health care or for essential work.

Elderly people are advised not to go out.

The lockdown will last until at least Friday, two days before the region goes to the polls to vote in regional elections.

Capacity in bars and restaurants will be reduced to 50% and people must wear a face mask if outdoors on beaches, or at swimming pools, the regional authorities said.

What are the chances of other lockdowns and what does this mean for tourists heading to Spain?

At the national level, Spanish authorities see the pandemic as having been essentially brought under control but are monitoring some 50 instances where new cases appear to be latent.

Spain's 17 regional governments are managing the control of the epidemic in their own areas and are liaising with the central government.

The policy is to try to contain any outbreaks locally before they have a chance to expand across the country. It is very difficult to predict if there will be more lockdowns but it is a possibility. It depends on whether there is a sharp rise in cases.

If tourists are staying in areas where these confinement orders happen, they will have to abide by the regulations like everyone else.

Darias confirmed that masks on public transport would no longer be compulsory after the Spanish cabinet meeting on February 7th.

She did not specify exactly when the new measure would come into force, although government agreements are usually approved the following day in the Official State Gazette (BOE), so the official end to the mask rule could be on February 8th.

Darias did clarify, however, that masks would still be mandatory in health settings such as health centres and hospitals “as the experts advise”.

Last week, Darias reported the possibility of eliminating the mandatory mask rule in pharmacies, but this is currently being “weighed up” by the experts.

The use of masks ceased to be mandatory outdoors almost a year ago, on February 10th, 2022. Then, two months later, on April 20th, the government announced they wouldn’t be required indoors either, except in health centres and on public transport.

On Wednesday, January 25th the director of the Health Alerts and Emergencies Coordination Center of the Ministry of Health (CCAES), Fernando Simón, assured that the end of the mask rule on transport would be announced “shortly” either “next week or the following”.