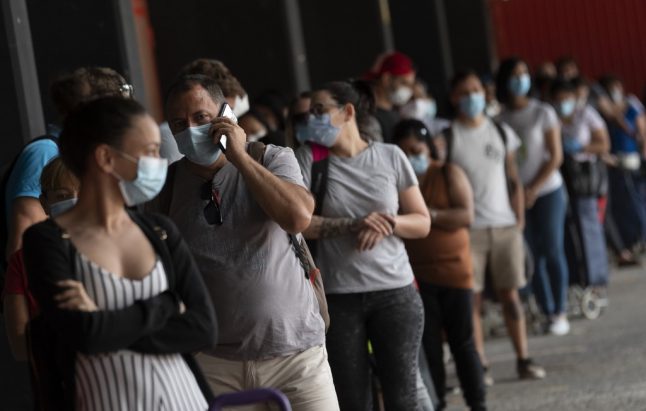 People queue during a food distribution event organized by the World Central Kitchen charity at the Mestalla stadium in Valencia on June 10, 2020. AFP

The report which was published on Monday called on the government to take drastic action to deal with deep-seated problems.

Philip Alston, who was the UN's special rapporteur on extreme poverty and human rights from 2014 to 2020, visited Spain in January to compile his report and said he witnessed what he called “truly outrageous conditions”.

Even before the pandemic, 26.1 percent of people and 29.5 percent of children were at risk of poverty or social exclusion in Spain, among the highest rates in Europe.

More than half had some degree of difficulty making ends meet and 5.4 per cent experienced severe material deprivation.

The unemployment rate stood at 13.78 percent but this year it is expected to rise sharply because of the economic damage caused by the pandemic.

“Poverty in Spain is rooted in a social protection system that is broken, underfunded, impossible to navigate and not reaching the people who need it most,” Alston said.

“The need for deep reforms is even clearer since my visit. COVID-19 has shined a light on the serious weaknesses in the anti-poverty programs of the central government and autonomous communities, as millions unable to work have encountered delays, glitches and inadequate support.”

Alston did offer cautious praise for Spain's left-wing government in tackling  poverty including introducing a new minimum wage for the most vulnerable families.

“The government has fortunately reacted to the pandemic with a number of positive steps to protect people in precarious situations, including new measures to secure jobs and housing, extending protections to domestic workers, and a new national minimum income scheme to support 850,000 vulnerable families,” he said.

“This is a vast improvement over the response to the last recession, which entrenched poverty and led to an explosion in inequality.” The government has announced it will investigate the conditions of migrant workers, reverse a steep decline in corporate tax revenues, and publish an index of nationwide rental prices.

However, Alston, a law professor at New York University, listed eight recommendations to ensure the lot of the poorest was improved in real terms.

These include cutting bureaucracy and inefficiency in social programmes, introducing means-tested national child benefit and a universal, non-contributory child and family benefit scheme.

New laws should be brought in to tackle Spain's public housing crisis and soaring rents plus a deep reform of the education system which is beset by high numbers of early school-leavers, Alston believes.

More protection should be afforded to Roma and migrants, the report concluded.