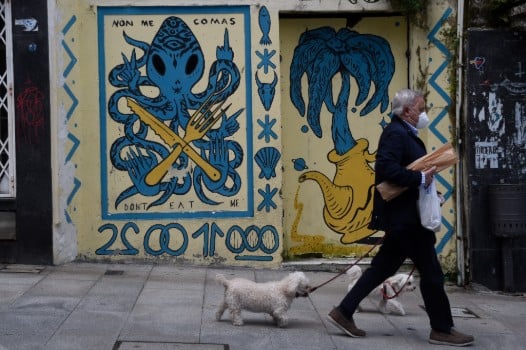 A man wearing a face mask walks his dogs past a graffiti drawn on a wall in Vigo, on May 10, 2020

All residents of the town of La Marina, 140 kilometres (90 miles) east of La Coruna, will be unable to leave the vicinity and gatherings of more than ten people will be banned to limit the possibility of contagion.

The move came only a day after regional officials put 200,000 people back in confinement following a “sharp rise” in infections near the northeastern town of Lerida some 150 kilometres (90 miles) west of Catalan regional capital Barcelona.

Spaniards endured one of the world's toughest lockdowns for three months from March as the country suffered one of Europe's worst coronavirus death tolls — at least 28,385 — and more than 250,000 cases.

“At the moment… we have 106 positive cases, which presupposes a rise on the previous day of 21 cases,” Galician regional health official Jesus Vazquez told a news conference in provincial capital Lugo.

“It is considered necessary to raise levels of restrictions to attempt to improve the outlook … and isolate ourselves from the possibility of exponential growth which is what tends to occur in the case of community transmission which, here, has not yet appeared.”

As a precaution the zone will be cordoned off for at least five days as authorities monitor the situation.

At the national level, Spanish authorities see the pandemic as having been essentially brought under control but are monitoring some 50 instances where new cases appear to be latent.