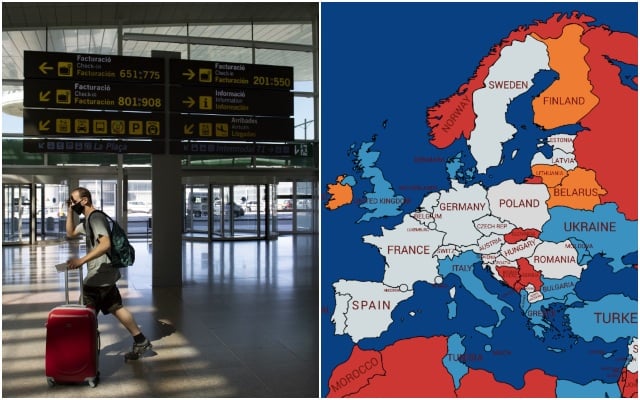 Let's start with the obvious: now is not the best time to go on holiday to a far-flung location.

Whether it's governmental advice or the sheer uncertainty of travel in these extremely testing times, the best advice is to stay close to your country of residence, in this case Spain.

Don't forget that there are thousands of tourists that have been stranded in remote locations around the world since March because they've been unable to book flights back home or get a seat on a repatriation flight.

“If you travel abroad, keep in mind that embassies and consulates are not travel agents or transport companies” Spain’s Ministry of Foreign Affairs warned on Thursday.

“They don’t cover travel surcharges which may arise or make up for the possible deficiencies of other countries’ health systems.”

For those who still wish to travel abroad, Spanish authorities advise that they take into account potential new Covid-19 outbreaks that may arise in their destination, and that they should take out medical and travel insurance “with coverage for all eventualities” and assess the possibility of “cancellations or shortage of flight connections” that could lead to a problem when returning home.

It’s a clear message of dissuasion from long-haul travel from Spain’s “Exteriores” Ministry, which suggests that international travel from Spain should be for destinations with direct flights and preferably within Europe.

The following map and information are based on updated data from Spain's Foreign Affairs Ministry released on July 14th, and could therefore change as events unfold.

It's also worth noting that although some countries may be open to tourists travelling from Spain, flight availability is still very low and in many cases involves long stopovers. What countries have no restrictions for people travelling from Spain?

Since the start of July, there are two daily trains from Barcelona, Figueres and Girona to a number of destinations in southern France and Paris in the north.

Other Schengen countries with no restrictions for travellers from Spain are Germany, Austria, Poland, the Czech Republic, Belgium, Latvia, Slovenia, Hungary, Estonia, Poland, the Netherlands and Sweden.

EU Member States Croatia, Bulgaria and Romania have also lifted their respective quarantine and border restrictions and are now open to visitors from Spain.

Switzerland opened its borders to Spain and other Schengen countries on July 6th.

North Macedonia and Kosovo also currently have no travel restrictions with Spain.

Mexico also doesn't currently have any restrictions for Spain travellers, although it's worth noting that the North American country has surpassed Spain's Covid-19 death toll of more than 28,000 fatalities and is still to contain infections. There are direct flights to Mexico City and Cancún. What countries allow tourists from Spain but have some measures in place?

The following countries allow people living in Spain to visit them, but there may be some safety measure in place such as PCR testing or some documentation that has to be filled in on arrival.

Schengen countries such as Greece, Malta and Italy have been included in this list by Spain's Ministry of Foreign Affairs, although there is little to suggest there is anything more than a form to fill in and a temperature check on arrival at the airport.

The UK government lifted its obligatory quarantine requirement for travellers from Spain to England, Northern Ireland and Wales on July 10th, but this doesn’t apply to Scotland yet.

Denmark and Iceland have also now lifted quarantine for visitors from Spain and have other less strict measures in place.

Other non-Schengen European countries that are allowing travel from Spain with some airport safety measures in place are Albania and Cyprus.

Outside of Europe, there are destinations in the Caribbean such as Antigua, Barbuda and Jamaica which have announced tourists from Spain can come as long as they follow the local health protocol.

Tanzania, Tunisia, Egypt, Rwanda and Cameroon are the only African countries which are currently open to tourists arriving from Spain, although getting there involves fairly long stopovers and at least one connection.

What countries have a quarantine in place?

Quarantine would require visitors to self-isolate so this won't exactly make for a good holiday for those looking to travel to the above countries for tourism.

What countries are currently not allowing arrivals from Spain?

As can be seen on the map, most countries in the world – 135 in total, all in red – are not allowing people travelling from Spain to enter and/or have cancelled air and maritime communications with Spain.

In terms of Schengen and European nations, the only countries where people in Spain can’t travel to are Slovakia and Norway.

Montenegro and Serbia are no longer available to tourists from Spain, after Spanish authorities followed the EU’s advice on July 16th and stopped travel connections with the Balkan nations following a spike in Covid-19 cases.