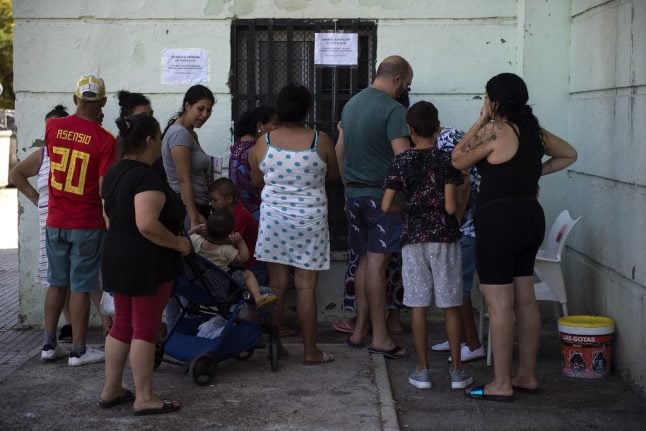 People wait outside the office of the "Asociacion Entre Amigos" charity at the Poligono Sur neighborhood in Seville. Photos: AFP

“What I want is to get out of here,” says the 35-year-old as she walks past her apartment block, the street littered with rubbish, broken glass and the desiccated corpse of a dead rat.

Earlier this year, García had been working at a local takeaway stand in Tres Mil Viviendas in southern Seville, but lost her job when the lockdown began in mid-March.

Her husband, a scrap dealer, is also out of work, meaning they have no money coming in at all and have been forced to survive on a €300 charity handout and donations of food and clothes, as well as help from her 85-year-old father.

During the last financial crisis, which began in 2008, García (below) lost her job in a restaurant and since then has only managed to hold down various temporary jobs as a waitress in a hotel or a carer for the elderly. Now she's hoping to train to in thanatopraxy — preparing the dead for burial — as part of a job placement scheme run by an association called Entre Amigos (Between Friends) that generates more than 100 contracts every year.

At the height of the lockdown, they were absolutely desperate.

“We even thought about going to down to a supermarket, filling a trolley with food and doing a runner,” García admits.

“It was a situation in which you've got absolutely nothing: when your child asks you for yoghurt and you say: I've nothing.”

The area suffers from 50 percent unemployment and is blighted with epidemic levels of both HIV/AIDS and illiteracy.

Many of its high-rises are filthy and run down and have been officially referred to as “vertical slums”.

Here, shops are almost non-existent and those who do work in other areas of Seville, often off the books, tend to find employment in hotels, as cleaners or as street hawkers.

The most urgent challenge posed by the lockdown was “ensuring people had food,” explains Jaime Bretón, the Polígono Sur commissioner who liaises between the local authorities and private groups helping out in the neighbourhood.

Backed by private funding, Bretón's work expanded massively in scope, and went from feeding 700 children in school canteens to providing food aid to more than 15,000 people.

Although the virus only had a limited health impact, the closure of schools was very damaging in an area where at least 60 percent of youngsters flunk school and one in four pupils drop out, Bretón says.

Betsaida Alexandre, an immigrant from Venezuela (pictured below) who lives in the best street in the area, says that of the 199 students at her children's school, 176 of them have no computer or laptop for their homework. For many children school was an escape, particularly in homes “where the parents fight or take drugs”, explained Alexandre, saying it was the only way a child could have “some normality for three or four hours”.

Since 2017, Alexandre, 45, has been living in an apartment with her husband, her children, her mother, her mother-in-law and her disabled brother — eight of them in total.

After working as a cleaner despite holding a degree in electronic engineering, she found a job in October as a temporary lecturer at the computer science department at the Sevilla University.

Her husband, who is a mechanical engineer, also works there in a laboratory.

But they live in the midst of people suffering from “extreme poverty” and people who are “very isolated”.

Marijuana 'all the rage'

On top of everything else, growing marijuana is “all the rage” in the neighbourhood, says her 51-year-old neighbour, who did not give his name but admits he's spent “half his life in prison” for drug offences.

And this translates into other problems such as frequent power cuts stemming from the intensive use of electricity by so-called narcopisos — or “drug flats” — which illegally tap power from the grid.

Pepe Serrano, an Entre Amigos social worker who has worked in the neighbourhood for 13 years puts the authorities' inaction down to “the widespread view from outside that everyone here is the same and that they're all complicit in what goes on”.

But the reality is that “many working families live here” who are “the real victims of the problems of coexistence in this neighbourhood”.