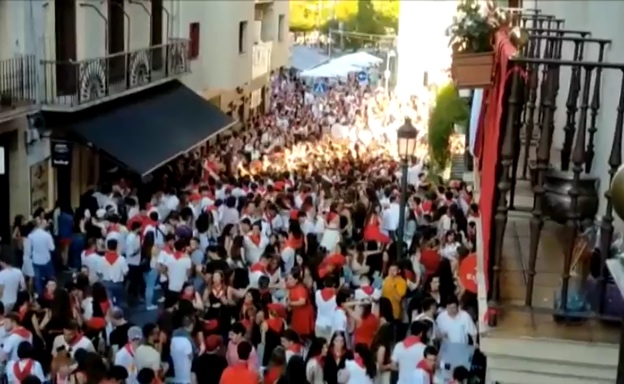 As Spain enters the month of July with its Covid-19 infection rate under better control than during the last three months but with more than 50 new outbreaks, news of a clandestine festival that took place in Gipuzkoa province has not gone down well with many.

A video filmed from a balcony by a resident of Irún shows a crowd of hundreds of mainly young people, dressed in the traditional San Fermín-style clothing of a red handkerchief and white top, drinking and partying in the street on Tuesday June 30th.

It was the town’s annual festival of San Marcial, an event which municipal authorities had cancelled this year.

But that didn’t seem to matter for the hundreds of partygoers who gathered in the Calle Mayor and surrounding streets, with no social distancing or facemasks in sight.

“It was shameful, a dreadful party. I daren’t go out on the balcony as it made me so angry,” one resident told La Sexta news.

According to other videos posted by Irún residents, the partying went on into the night.

The scene was reminiscent of the big crowds seen just days ago at the Sant Joan festival in Ciutadella on the island of Menorca, another event where masks and social distancing were a rarity.

The arrival of summer signals the start of local festivals and celebrations across thousands of villages, towns and cities across Spain, and even though most of this year’s events have been cancelled, it’s unlikely that the clandestine street party in Irún will be the last one to go ahead.

Since Spain ended its de-escalation plan and started to allow tourists in from Schengen countries – thus returning to what the government has dubbed the “new normal” – the number of new Covid-19 cases has been on the up.

Over a period of seven days ending on June 30th there were a total of 1,978 active infections recorded by regional health sources in Spain– representing an 8.8 percent increase when compared to the weekly report from June 20th.

In the Basque country, where Irún is located, there have been 49 confirmed cases and three Covid-19 deaths over the past week.