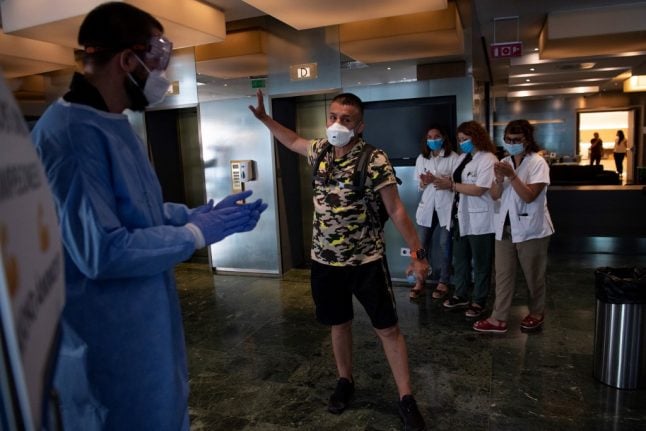 After months of supporting the healthcare system, this medicalised hotel is closing its doors to get ready for its own return to normality although it will be some time before its regular clients return.

Since the end of March, more than 500 virus patients have stayed at this 300-room hotel, which at one point counted full occupancy.

On Wednesday, the last six left the hotel to the applause of the staff, who were exhausted but elated after months of hard work.

“We're empty again, we're used to the hotel always being busy. It's been a very special experience, nearly 100 days with patients,” said Hugo Figueroa, 45, a mid-level manager standing at reception.

At the hotel's entrance, where coaches and ambulances dropped off dozens of patients every day at the height of the crisis, things are beginning to get back to normal. Even so, a nurse can be seen at the back of the lobby — near the breakfast room that for months served as medical staff's makeshift office — organising boxes of medical gear next to a rail on which blue protective suits are hanging.

Outside in the street, deserted when the hotel was taking in COVID patients, cars and people are now passing normally, although everyone is wearing a mask.

“The epidemiological situation has changed, we have moved forward a lot. And to be shutting down the hotel now is a reason to be glad,” doctor Maria Pérez-Hervada told AFP.

It was here that she spent most of the lockdown as Spain battled the worst of an epidemic that has so far claimed more than 28,300 lives, and infected nearly 250,000 people in the country.

“At the start, patients came from hospitals, almost all of them had been in intensive care and some had complications and had to go back,” she said.

Later, there were fewer serious cases with guests in recent weeks suffering only light symptoms not requiring hospitalisation — but were unable to self-isolate at home.

Janela Casandra Armeno, 22, was among them — she spent a week at the hotel with her father-in-law because there “weren't enough rooms” at home for them to self-isolate.

But her father-in-law has to wait a little longer after he and three other patients tested positive, and are being transferred to another hotel in the Melia chain that will remain medically-equipped to handle any new outbreaks.

With no more patients, the Sarria will start the transformation back, with cleaners taking a week to disinfect different areas and staff shifting beds. Its doors, however, will remain shut until at least September.

Although Spain has reopened its borders to EU travellers and those from 15 other countries, the hotel is not expecting enough visitors to warrant reopening and will use the summer for renovations.

“We could reopen next week but we're in financial district which relies on a different type of client,” explained manager Enrique Aranda.

“The idea is to reopen in September when there will be more conferences and business clients.”

Back at reception, after a group photo with the medical team, Figueroa can't hide his delight at the thought of once again welcoming regular clients in taxis and limousines.

“That's what we're looking forward to: a return to some sort of normality,” he said.