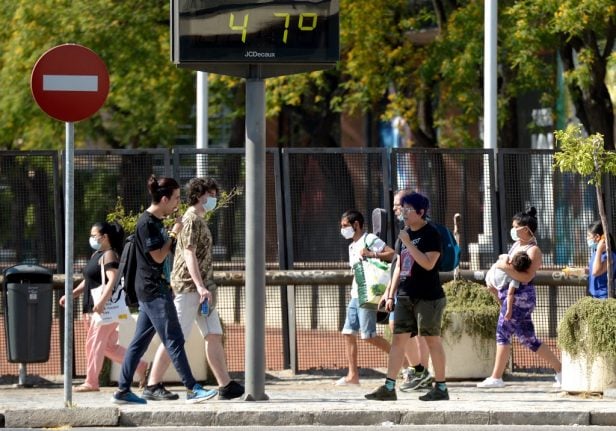 The arrival of the hot summer weather in Spain, as seen in the photo above in Seville, has made wearing a mask more uncomfortable for many. Photo: AFP

Since Spain ended its de-escalation plan and started to allow tourists in from Schengen countries – thus returning to what the government has dubbed the “new normal” – the number of new Covid-19 cases has been on the up.

In the past 7 days there have been a total of 1,978 new infections recorded by regional health sources – up by 8.8 when compared to the weekly report from June 20th.

There are now 50 places in the country that have suffered outbreaks, the most worrying of which are in Málaga in the south and in Spain’s north-easterly provinces of Lleida in Catalonia and Huesca in Aragón, where migrant agricultural workers with no fixed address have made up the bulk of new infections.

“But let's say we have to be aware of them, we will have to keep an eye on this trend”.

The most affected region is Catalonia with 621 new cases in the past seven days, whereas Asturias on Spain’s north coast has been able to declare itself Covid-19 free with no infections in the past 14 days.

The criteria being used by Spain’s Ministry of Health to classify an increase in cases as an outbreak are when there are three related infections and when an infection happens at a care home, a formula not all regional authorities agree on.

Cantabria’s regional government for example has refused to refer to the 13 infections recorded in a building in its capital of Santander as an outbreak and Andalusia has chosen to call the spike in infections in Algeciras a “cluster” (using the English word).

Madrid, with almost a third of all infections in Spain since the pandemic began (71,950), is the most noticeably absent from the apparent list of new outbreaks, given that their regional government hasn’t published its weekly total for two weeks.

Since Spain lifted lockdown, images of crowded beaches and local festivals have angered many Spaniards who fear a return to confinement.

But data shows that many of these new outbreaks have resulted from large family gatherings as in the case of Navalmoral de la Mata (Cáceres) in western Spain, which resulted in more than 20 infections.