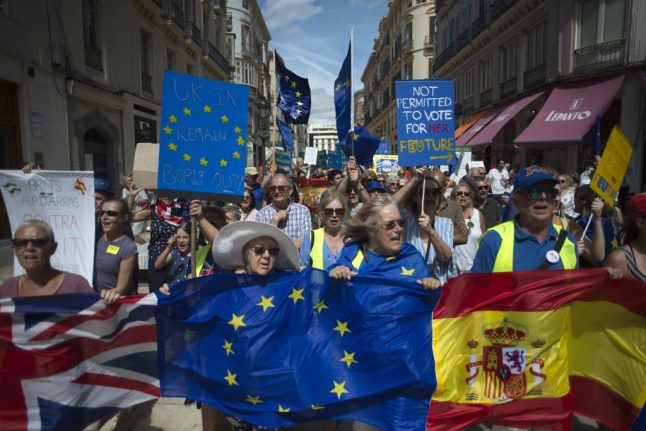 British nationals wave European Union and Spanish flags as they take part in a protest against Brexit in Malaga on September 22, 2019. AFP

On the last day of June, the deadline for the Brexit transition period extension passed, almost unnoticed.

The British government has always insisted it would not seek an extension, even though one was on the EU table. This position may have been justifiable before the coronavirus crisis, but not under current circumstances.

The EU/UK negotiators have just a few months to agree a trade deal and cement a future relationship. Although the transition period expires at the end of 2020, an agreement will need to be reached by October to allow time for ratification.

Should an agreement not be reached, the UK will be forced – perhaps willingly – to trade on World Trade Organisation terms. That would see tariffs on goods, customs inspections at borders, and additional costs and administration – none of which have been adequately prepared for in the UK.

For UK residents, that will probably mean a further significant economic downturn, food and medical shortages, job losses, and more. For those of us living in Spain, many of the EU citizenship rights we have enjoyed will finally cease, and we can expect the Pound/Euro exchange rate to decline further.

A no-trade-deal Brexit is not the same as the much-feared no-deal of 2019, when all our rights were at stake. We now have a deal that protects many of our rights, including ongoing healthcare and pension provisions.

Those are protected for our lifetimes by the Withdrawal Agreement – a legally-binding, international treaty. People who are not of retirement age on 1 January 2021 will qualify for their S1 pension/healthcare when they reach retirement, if they have the required UK National Insurance contributions.

Other citizens’ rights have not been agreed, and probably won’t be, even if the EU and UK reach a trade deal. The loss of our freedom of movement as EU citizens will have the greatest impact. This signifies more than our ability to travel freely, or to work/study anywhere in Europe – it’s also about where we live.

A common misconception is that our legal rights in one EU country are transferable to another. That is not the case. Having legal residency in France, for example, doesn’t enable you to move to Spain as if nothing has changed. Unless you move before the end of 2020, you will only have the right to live, study, work or retire in the country where you are currently legally resident.

Ever since the Brexit referendum, a steady wave of Brits has fast-tracked their emigration plans. Despite fears of a mass exodus of Brits from Spain, travel has largely been in the opposite direction. Presumably, the exodus from the UK will continue until the December 31 deadline.

Not everyone who dreams of working or retiring in Spain will be able to do so. Sadly, many will give up their dream thanks to Brexit. Immigration to Spain for a non-EU citizen is possible but would require overcoming more hurdles and having deeper pockets.

If social media reactions are anything to go by, many leave-supporting Brits in Spain are finally grasping the ramifications of their Brexit vote, while blaming the EU for their loss of rights. The more extreme of these voters believed all along that little would change. Now, reality is beginning to dawn on them.

No matter how you view Brexit, at the end of this year, our lives are changing. Whether those changes are large or small will depend on your personal circumstances. I am fortunate enough to be retired, with my healthcare and pension guaranteed for life, and I have absolutely no desire to move anywhere else. I anticipate that my pension will decline in value and I may have to tighten my belt. However, if lockdown has taught me anything, it’s that I can happily live in Spain with less.

Brexit divides still run deep, even at this safe distance, but I hope both sides can agree that a trade deal and close future partnership is better than no deal. Furthermore, a good trade deal is better than a bad one – for Remainers and Leavers alike.

For those Brexiters that disagree, I will continue to ask the one question Remainers have been asking all along. Please tell us one benefit – any benefit – of the UK leaving the EU.

You have had plenty of time to come up with an answer. Now’s as good a time as any!